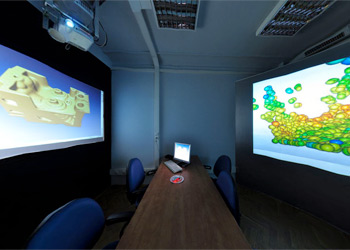 Deep in the corridors of AGH, engineers and scientists are two years into a four-year, 10 million euro, EU- and government-funded project to revolutionise how complex, distributed computer systems work. This may not sound particularly exciting, but the strategic goal of this collaboration between AGH, the Wrocław and Poznań Politechnics, the Economic University in Poznań and the Polish Academy of Sciences, is to improve the competitiveness of Polish businesses, develop the national economy and help develop an IT society. In fact, it’s funded from the Polish government’s Innovative Economy programme. The first phase of the project, which included a thorough assessment of the current situation, the development of a unifying framework and new software to introduce flexibility into the design of distributed systems, has already caught the attention of IT giants like Google, Nokia and IBM. They are now paying close attention to the second phase: the application of the technology in a group of demonstration projects.

The goal of the project is to develop Adaptive Service Oriented Architecture for distributed systems. What this means to the non-techie is that computers, devices and people, all in different places, will find it much easier to communicate and adapt to changes in their environment. At the moment, controlling a distributed system (one where the computers, people and devices are all in different locations) is complicated; the various bits of the system do not speak the same language and the information they need to do their job is often not compatible with other elements in the system. Coordinating this requires bespoke software to be developed just for that system; an expensive and time-consuming process, but this is the way that things have been done for the last 40 years. In contrast, a SOA approach breaks down the various actions that a system carries out into a set of “services” with clearly defined inputs and outputs, and protocols for sending data in and out. A simple example of a task may be viewing an online bank statement; the task is the same for all banks, just the inputs (e.g. the bank account number) differ. However, a bank will usually write this software itself, but an SOA-based approach would mean they’d be able to plug in that element, saving time and money. What this requires in order to work is one “ecosystem” that sets the rules for how all the elements within it work. This is what the AGH-led project team are working to create, but with the addition of adaptability.

This is all quite esoteric, so the next phase of the project will focus on developing specific solutions that will demonstrate the potential of this approach. Six sectors have been chosen, including remote interactive medical consultation services, environmental monitoring and security systems and construction projects. More about the project can be found on www.soa.edu.pl.