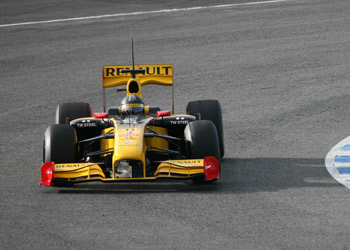 The Turkish Grand Prix was held in dry conditions despite some threatening clouds, which ultimately failed to produce the rain that might have shaken up the otherwise processional event. Krakow’s Robert Kubica appeared to be fated to finish the race in seventh when he was unable to get around Nico Rosberg, who was running with poor pace but defending his position and generally obstructing all traffic behind him.

The situation changed to the Pole’s advantage — and to a much greater degree, to the advantage of McLaren’s two British drivers, Jenson Button and Lewis Hamilton — when the two leading cars, driven by Red Bull teammates Mark Webber and Sebastian Vettel, collided as Vettel moved to overtake Webber in the late laps. Vettel did not finish as a result, while Webber dropped to third, giving the race and a whopping 43 points to McLaren’s British duo. They, too, then engaged in some daring wheel-to-wheel racing, before concerns about fuel levels appeared to slacken their appetite for aggressive manoeuvres.

The Red Bull catastrophe is complicated by the tension already reported between the two drivers. Sources near the team have indicated that Vettel has grown resentful of attention given to Webber in the media after his strong finishes over the past month.

Thanks to the accident, Kubica finished sixth.