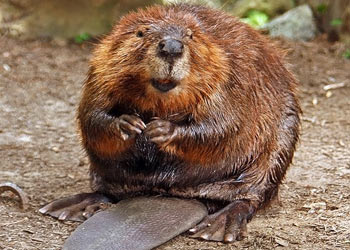 Is the beaver “the greatest enemy of the flood defences”? According to Jerzy Miller, Polish minister of the interior, there is no doubt. “They live everywhere along the levees on the Wisła River and cause a lot of damage to them,” the Daily Telegraph cited. Since torrential rain caused rivers to swell beyond emergency levels in southern Poland almost two weeks ago, the surge has spread further to the regions of Wrocław and Warsaw.

As the nocturnal rodents are known for building dams, canals and lodges as their natural habitat, beavers complicated and interfered with efforts undertaken by emergency forces to fight the floods. By gnawing through dykes, digging tunnels in dams and thus sapping protective barriers from the inside, beavers caused further flooding. So far, the flood claimed 16 victims and around 4,000 people had to be evacuated. Overall, about 20,000 people were affected by the deluge.

During the course of the catastrophe, local governments increased the hunting quota on the apparently unconcerned beaver to mitigate the problem. Hitherto protected by the state, the Castor fiber (European beaver) seems to have lost its environmental immunity in Polish inshore waters. The number of the semi-aquatic rodents living in Poland is estimated at around 50,000. Ironically, beavers have just been recently repopulated in Poland and other European countries, after having been over-hunted. Almost extinct in the middle of the 19th century, the beaver experienced a huge comeback due to successful protection programmes and advocacy by conversationists.

Yet, blaming and preying on the beaver appears, once again, to be a way of dealing with the unforeseen consequences of human actions. It is not the first time that Poland experienced such a devastating flood. In 1997, when the country was hit by the most severe deluge in recent history, 54 people died, more than 150,000 people were evacuated and the overall damages accounted for billions of euros. The question remains, what measures have been taken to prevent and deal with such emergencies?

The present amount of damages is estimated at around 2.5 billion euro. The Polish government is said to be spending 500 million euro on new housing and reconstruction. While the water levels are sinking back to normal in the southern Małopolska region, security and emergency forces are still coping with dangerous floodwaters flowing to the northern and western parts of the country.