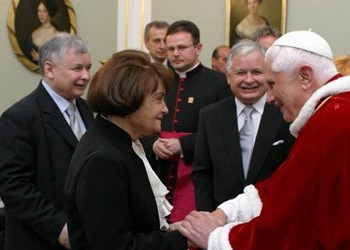 Jadwiga Kaczyńska, the mother of late President Lech Kaczyński and his twin brother (and presidential candidate) Jarosław, was only told yesterday about her son’s death in a plane crash near Smolensk, Russia. The accident happened on 10 April, over six weeks ago.

It was Jarosław Kaczyński who delivered the news of his brother’s death to his mother in Warsaw, where she has been hospitalised since March. According to Rzeczpospolita, his mother took the news “very badly, but not tragically”. Elzbieta Jakubiak, a close aide to the late president’s twin, told TVN24, “This was the most difficult moment in Jarosław Kaczyński’s life”.

Concerns for the health of the 83-year-old woman kept the Kaczyński family from revealing the news of the death of her son and daughter-in-law for so long. Mrs. Kaczyńska’s doctors had advised that such terrible news could be dangerous to her fragile health. She is suffering from heart and lung disease, and has spent time on a respirator.