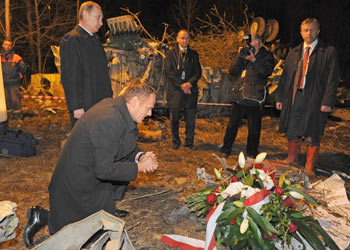 This week, investigators of the 10 April plane crash that killed President Lech Kaczyński and 95 others revealed new details about the accident. On Wednesday, the joint Polish and Russian investigative team issued a report that ruled out terrorism or technical failures as causes of the crash, and hinted towards pilot error as the likely cause.

The pilot had ignored several warnings about the dangerous conditions at the Severny airfield. Just before the crash, air traffic controllers had advised the crew of the Tu-154 plane to fly to another airport, instructions which they ignored.

The investigative team have been examining recordings from the black boxes found in the wreckage as well as recorded conversations from the cockpit.

The report also reveals that at least two non-crew members were present in the cockpit at the time of the crash, which may support earlier speculations that the pilots were pressured into landing at Smolensk despite the dangerous conditions. According to the Polish Press Agency, one of the voices recorded in the cockpit is that of General Andrzej Błasik, commander of the Polish air force.

The investigations are still ongoing. Alexei Mukhin, director of the independent Centre for Political Information in Moscow, told the Christian Science Monitor: “Russian Prime Minister Vladimir Putin ordered that [the investigation] be done with full openness and cooperation with the Polish authorities, because it’s very important that there be no suggestion of any coverup. Putin made it clear that if any blame should be found on the Russian side, there will be punishment.”

Despite the recent revelations by investigators, a new survey by the OBOP Institute shows that 51 percent of Poles do not believe that the true cause of the plane crash will ever be fully known.

One thought on “Pilot Error Likely Cause of Presidential Plane Crash”