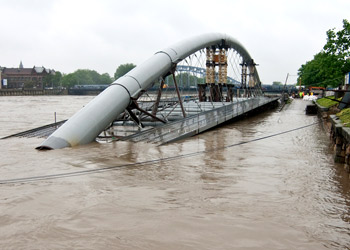 The death toll in Poland has risen to five people as rains continue to pour throughout parts of the south of the country. In Krakow, the Wisła River reached a peak of 957 cm, or over four and a half metres over the emergency level, and the highest level in 40 years.

Several neighbourhoods throughout Krakow were evacuated yesterday and this morning. Nowohucka Street between Na Zakolu Wisły and Koszykarska streets has been evacuated. Residents of ironically-named Wioślarska (rowing) Street received notices this morning to prepare for a possible evacuation, and buses are stationed near the street in waiting. Evacuated residents are being taken to local schools and public buildings. As of 10 am this morning, the Mayor’s office reported that 120 people had been evacuated.

However, it’s not all grim news. Morning reports state that the water is actually receding, and now 27 places along the Wisła are at emergency levels, where there were 32 yesterday. While the Dębnicki and Nowohucki bridges remain closed, the rest are open to traffic. The yet-unfinished pedestrian bridge (pictured), which threatened to break off and possibly damage the Powstańcow Śląskich Bridge, is so far secured.

Meanwhile, the Auschwitz Museum, which lies 50 km from Krakow, is under threat of flood damage. Some of the barracks at the former Nazi concentration camp were reported to have water seeping in. The camp is closed to visitors since Monday, and museum officials have taken measures to protect the exhibitions and collections.

See also: http://www.krakowpost.com/article/2089
Photos and video of the flood