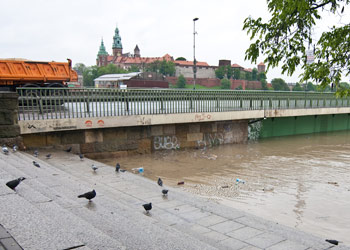 This morning, the Wisła River reached a level more than three metres above the emergency level, which was breached on Sunday. As of 10:20 am, the Dębnicki Bridge (pictured) was closed to all traffic, while embankments along the river have been further strengthened.

Public transportation routes throughout Krakow have changed because of the rising waters. The following roads are impassable, and bus and tram routes have been redirected: Podgórki Tynieckie, Bogucianka, Korepty, Winnicka, Smoleńskiego, Zakamycze, as well as the viaduct at Rondo Grunwaldzkie.

In the Małopolska region, 32 places along rivers have reached emergency levels with 19 additional locations in a state of alert. Twenty counties and municipalities have issued a flood alert, and 13 have declared flood emergencies. There have been four deaths so far: two of those in the Małopolska province, including an eight-year-old boy who was found in the Olszanicki stream in Krakow. The flood has left more than 4,600 households without electricity throughout the province, including many in Krakow.

On Monday evening Prime Minister Donald Tusk arrived in Krakow along with Minister of Internal Affairs and Administration Jerzy Miller. The prime minister assured residents that city officials would work to minimise the damage resulting from the flooding. Resources in the form of firefighters and other emergency workers are being transferred from areas declared less in risk of flooding to those in states of emergency.

Prime Minister Tusk and the interior minister have been visiting affected areas throughout the day. Meanwhile, weather forecasts for the area are predicting rain through Friday.