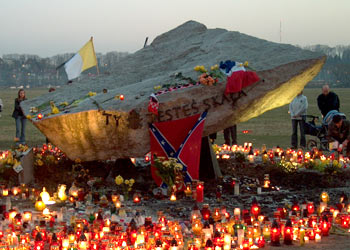 As the preparations to erect a wooden cross at Krakow’s vast downtown grassland proceed, municipal officials are at odds with each other about the legal status.

The idea to place a cross next to the Papal stone memorial at Błonia Park runs against municipal opinion, as the project’s initiator, the Association of Jordana Park, apparently didn’t apply for a building permit for the structure. To erect any monument on the site, consent must be granted by the city of Krakow, the owner of the land.

According to Kazimierz Cholewa, head of the Association of Jordana Park, the legal steps for building the monument weren’t completely known to him. That is why the association signed an agreement with the Office of Municipal Infrastructure and Transport (ZIKiT), which is in charge of the park, to lend the area concerned. In so doing, the association was authorised to apply for a building permit until 16 May. However, without seemingly having applied correctly, nor received any formal permission, construction works for the cross have been started.

For the time being, the erection of the cross seems to be illegal. Krakow Major Jacek Majchrowski expressed that he will not be able to agree on the project, as long as it does not comply with the legal formalities. A related issue is the fact that the Błonia site belongs to the city. Accordingly, public consent should be sought in the first place. This, in turn, could be difficult, as there are voices opposing the idea of placing another monument of worship on the public site. As echoed by the head of the VII district, Andrzej Chwarank, the park belongs to Krakow’s city dwellers and should keep its public character.

The idea of building the six meter oak cross memorial next to the Papal stone dates back to last summer, when the Selector electronic music festival took place at Błonia Park. With thousands of ravers surrounding the Papal stone, the spiritual site was apparently profaned and remains in risk of being so with further festivals to come, opined Cholewa. From this came the idea of the cross, and along with it a demand for a protected area of one hundred meters to surround the spiritual monuments.

The construction works have meanwhile been stopped by the municipal police and notwithstanding the legal grey area, the unveiling and dedication of the cross, lead by bishop Albin Małysiak, is scheduled for Saturday, 15 May. A decision to clear the legal situation is not to be expected in the next two weeks.