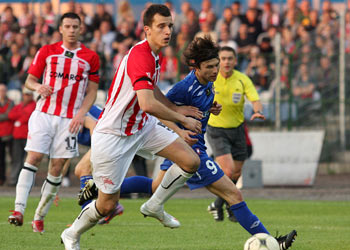 Extra time goals minutes apart in two stadiums resulted in the almost certain dethroning of Polish champions Wisła Krakow, as the Krakow derby resulted in a draw which also assured Cracovia a place at the table in Poland’s top league.

Wisła Krakow bade farewell to its chances to retain the Polish championship on Tuesday night in the second to last round of the 2009/2010 season in a dramatic draw against bitter local rivals Cracovia. After having led the Ekstraklasa rankings for the entire season, Wisła relinquished the top spot to Lech Poznań, who trailed by a single point going into the 29th round. The three points that Lech gained through victory in Chorzów were enough to push them ahead of Wisła, who received only one for their draw with Cracovia. Lech now leads the Ekstraklasa with 62 points to Wisla’s 61.

Both matches saw many fouls and some controversial decisions by the referees. No fewer than six cards were shown at the Lech-Chorzów fixture, and Wisła had four names taken by the arbiter.

After an early offensive in the first minutes by Cracovia, Wisła took control of the match in Krakow, but failed to convert their opportunities into goals. In the 39th minute of the Krakow match, Wisła’s Arkadiusz Głowacki fired a sliding shot into the Cracovia goal, only to have the play disqualified due to a foul on Cracovia keeper Łukasz Merda. After the break, Wisła continued to neutralize Cracovia’s offense with disciplined play at the back, counterattacking with threatening but fruitless charges into the Cracovia half, until in the 79th minute Rafał Boguski looped an arcing shot over the Cracovia netminder, and the ball cleared the goal line by inches before being booted out by a Cracovia defender.

Meanwhile in Chorzów, Lech had trailed since the 46th minute when Ruch defender Wojciech Grzyb played the ball in from the right wing to Michał Pulkowski, who slammed it into the Lech net. Lech’s star striker, Robert Lewandowski, evened the score with a shot in the 69th minute, his seventeenth of the season.

In the final minutes of each match, events turned dramatically against Wisła, first when an added time goal in Chorzów by Sergiey Kryvets put Lech ahead 1:2. Still unaware of the dramatic reversal, Wisła’s chances of retaining the league lead vanished as the tying goal went into the Wisła net off of Wisła’s Mariusz Jop’s bungled attempt to clear a free kick from Cracovia’s Moldavian striker Aleksander Suvorov in the 93rd minute, only six seconds before the referee was to blow the final whistle. The massed home fans in both stadiums erupted in euphoria as the word spread that Lech was now the probable Polish champion, as Wisła supporters reeled in horror at the own goal.

During the fall round, Cracovia won their first meeting of the season with a 0:1 victory, their first unqualified success against Wisła in 14 years. Tuesday’s tie is to be doubly savoured for Cracovia supporters, as it not only undermines Wisła’s chances of another championship, but also aids allied club Lech in seizing the crown. Even more importantly it assures Cracovia of remaining above the relegation level, as recent defeats had seen the flagging club sink in the standings.

Any hope for Wisła to regain the lead will depend on the unlikely scenario of a defeat or tie of Lech by Zagłębie Lublin on Saturday. Wisła is likely to show coach Henryk Kacperczak the door when the season ends, and speculation is widespread that Jop’s contract will not be renewed over the summer.