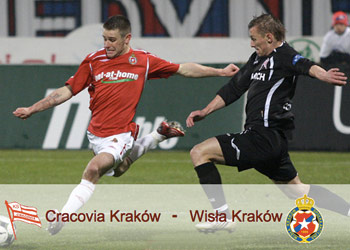 As the supporters of both of Krakow’s football clubs gear up for tonight’s derby match, the table is set and the stakes are high.

Victory tonight is essential for both teams, possibly determining the championship of the league for one and whether the other gets a place at the Ekstraklasa table next year. Wisła stands atop the Polish top league table on very unsteady footing — they lead Lech Poznań by a slim margin of one point after both Lech and Wisła won their matches over the weekend. For Cracovia, tonight’s result could dictate whether they remain in the top league at all next season, as they desperately attempt to tread water just above the relegation level. After tonight, only one more round remains in the season.

Foreigners would be well-advised to leave their “Where’s Wally” red-and-white stripes or any clothing with white stars on it at home tonight, as the people of Krakow can expect passions to flare as the ardent supporters of both clubs will be out in force tonight, under the watchful eyes of hundreds of riot-gear equipped police. Tonight’s home match will be played at 7:00 pm at Stadion Suche Stawy in Nowa Huta. It will be televised on Canal+ Sport.