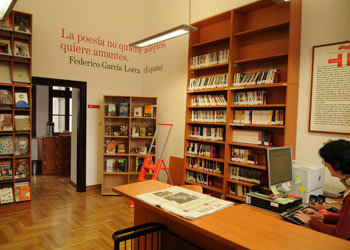 Since 2005, when the Cervantes Institute opened its headquarters in Krakow, its cultural and academic activity has not stopped. The entity began in conjunction with the Warsaw Institute, but has worked independently since October 2008. It is divided into cultural and academic activities, which both aim – like other Cervantes Institutes – to spread Hispanic language and culture (from Spain and Latin American).

Amongst the cultural events that have taken place so far this year, first of all there have been several photography exhibitions. In the first quarter of the year, the Institute organized two shows: “Aquí y Ahora” (“Here and Now”) in the Pauza Gallery and “A través de mis ojos” (“Through my Eyes”), in the Kino Pod Baranami cinema and the Bona bookshop, on Kanonicza Street, which ran through early April. Furthermore, an exhibition of the work of Manuel Álvarez Bravo, the Mexican artist who was one of the pioneers of photography, is planned for June. Towards the end of the year, in September, the Cervantes Institute plans to organize another exhibition with the photos of Jordi Socías. Both of these activities will also be located at the Pauza gallery. From 17-20 May, against the backdrop of Photomonth, the Institute will hold a photography workshop on the history of Spanish photography, from the 19th century onwards. This activity will be directed by Román Navarro Carrasco.

The Cervantes Institute also focuses on cinema. Between 24 and 28 February it held a cycle dedicated to the Mexican director Luis Buñuel. This activity was organized with the Mexican Embassy to mark the anniversary of the Mexican Revolution. From 11-13 June the Institute will show five films by Mexican director and fighter El Santo, and from 28 to 30 September we can see films by Emilio Fernández. This activity will be completed with the Latin American Film Festival in June and the “En Construcción” (Under Construction) festival, with works financed by the Cervantes Institute and other institutions.

18- 31 March was the Week of Spanish Cinema, with many films, including the winner of two Goyas (the Spanish Oscars), Yo también. During this cycle the Institute has shown the short film El trompetista de la torre. This work was produced by PDA, a company from Barcelona that has been making films with children from six to 12 years old since 2008.

The Cervantes Institute Library is another way to diffuse Spanish culture. It has a full collection of Spanish and Latin American literature – some translated into Polish – and a video library with a good collection of the seventh art from Spanish-speaking countries. Recently, the Institute has been adding Spanish translations of Polish literature.

The Institute’s academic activity is also intense. It currently has six classrooms with the latest technology for teaching Spanish. In fact, this Institute is the first in the world to install digital blackboards and Internet connections in all rooms. The intention is to teach a standard form of Spanish, including Spanish and Latin American culture, but always adapted to the reality of each city and country. In Krakow 1,200 pupils spend four hours a week learning Spanish, to complete 60–hour courses. Matriculation periods are in line with the university calendar (courses are from October to February, from February to June or intensive in the summer).

Another possibility offered by the Cervantes Institute is a scholarship to study Spanish in Spain, in collaboration with the Menedez Pelayo International University. It also offers the chance to study for the DELE diploma. The Institute currently offers all levels except C1, which will be added in November. You can also obtain this certificate online using Internet training over the course of 300 hours of learning.

Finally, the Cervantes Institute dedicates time to teacher training. A Spanish as a foreign language course is currently underway, comprising 60 hours of theory and practice. Furthermore, from 7- 8 May the Institute will hold a Spanish Teacher Meeting, bringing together 150 teachers from several European countries with the main aim of exchanging experiences and methods.

The Institute offers many activities to suit everyone, with the main aim of bringing Spanish reality closer to the people of Krakow.

The Cervantes Institute is located at ul. Kanonicza 12. More information can be found on their website at cracovia.cervantes.es.