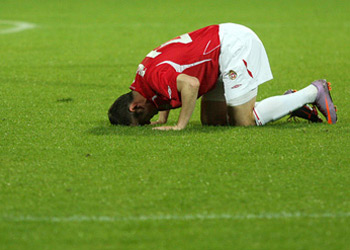 Wisła Krakow remains at the top of the Ekstraklasa, the top Polish football league, but the Polish champions’ claim to the throne grows ever more tenuous as they have conceded another defeat to a team form the middle ranks of the league over the weekend, this time to Korona Kielce. The past two weeks have seen the Krakow squad locked in a race against Lech Poznań, whom they hosted in a nil-nil draw that left them crippled by injuries to key players on Saturday 24 April. With three rounds remaining in the season, Wisła now leads Lech by a single point.

The defeat at the hands of Kielce came as a shocking blow to the squad’s championship hopes, cutting their four-point lead over Lech to one. Tenth-place Kielce had just lost their first home match to Legia in 27 years (during most of which Kielce was not in the top league), but nevertheless surprising the visitors with a strong performance.

Kielce came out fighting on Friday against the Krakow squad, scoring in the ninth minute on a shot by Jacek Kiełb, then in the 25th minute a shot by captain Nikola Mijailović ricocheted off the crossbar and down onto Wisła’s goal line, only to bounce back out into play. Wisła allowed numerous other scoring situations, failed to create a credible shooting scenario of their own until after the intermission. They were nevertheless unable to beat Kielce keeper Zbigniew Małkowski, leaving the final at 1:0.

Wisła has maintained its position in first since beginning the season with a nine-match undefeated streak before coming up against serious competition in the form of Lech Poznań. As the season has worn on, a decline in their offensive form overshadowed their early successes, as they found themselves unable to score against the top clubs, then against middle-ranking clubs, skidding into a scoreless streak which only ended after coach Maciej Skorża was shown the door in March. Skorża’s replacement by his own predecessor, Henryk Kasparczak, raised eyebrows and brought modest improvement, but failed to address fundamental issues, which have now been compounded by the loss of keeper Mariusz Pawełek to a knee injury, who will not play for the balance of the season. The club’s fans now anxiously eye Marcin Juszczyk.

To maintain their position at the top of the table, Wisła cannot afford a loss in any of its remaining matches against Legia Warszawa, Cracovia Krakow, or Odra Wodzisław, of whom the club has beaten only Odra this year. In contrast, Lech Poznań will face Polonia Bytom, Ruch Chorzów, and Zagłębie Lublin, none of whom have won against the Poznań “railroadmen”. Lech, whose Robert Lewnadowski is the league’s top striker with nine goals, has not lost a league match since 25 September.