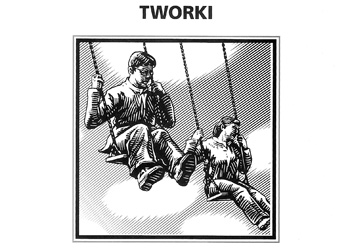 Relatively recently translated into English, Marek Bieńczyk’s novel, Tworki, is not an easy book to categorize. On the surface it is a novel taking place during World War II in a mental hospital outside Warsaw, called Tworki. For those of us not from Poland, a little background is necessary: Tworki is the most famous mental institution in Poland, with similar connotations to Bedlam in England. Like Bedlam, it’s an unhappy place, a place of insanity. Yet with World War II looming in the background, in this novel Tworki becomes more reminiscent of the Garden of Eden compared to what is occurring beyond its walls.

The basic plot of the novel is simple. In the beginning the protagonist, Jurek, lands a job at Tworki in the administration as a bookkeeper. During the war, getting a job as good as this was a coup, and regardless of the fact that it’s Tworki, he starts work with high spirits. Not that he terribly wants to be a bookkeeper: his real love is poetry. But work he must, so he moves into Tworki and becomes part of an enigmatic group of fellow workers who have been lucky enough to find work in the relative safety of Tworki. Only things aren’t as they seem, and as the novel moves along, one after another the employees disappear, the reasons why becoming gradually more clear.

Plot aside, this is not a novel that is easy to read. The language is difficult and elliptical, and often more resembles a long prose poem than a straightforward novel. The translator, Benjamin Paloff, succeeds in recreating Bieńczyk’s odd linguistic charm, which can make for hard going at times, but also for moments of beauty. This is also a novel whose aspirations extend far beyond telling a simple story. Early on in the novel Bieńczyk places himself in the text, having himself sitting in Tworki fifty years later with a laptop, to give an example of the self-consciousness of the author as an interloper that pervades the novel. The characters have also obvious allegorical qualities. This is most obvious with the patients of the hospital, who go around with the names of great men: Antiplato, Vivaldi, Durer and Goethe, just to give a few examples. But Jurek, the budding poet, and Sonia, his tragic muse, also carry within themselves the echoes of larger meanings which we are left to decipher.

If I were to characterise Tworki, I would say it isn’t a novel about war, or the shadow of the Holocaust, but about nostalgia, and the meaning of loss, and the ability of language to recreate and reconstitute the world. The language of the novel itself is perhaps the central character, and should be read with care. Bienczyk’s skill is that he never goes too far: the characters are never overburdened with the meanings that are placed onto them, and the narration always maintains its integrity as a story. Tworki isn’t an easy novel, but it’s well worth the effort to read, both in itself, and also as a window into a Poland that no longer exists.