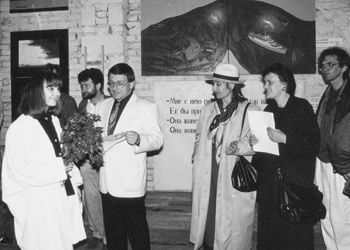 On 2 June, 1979, a plane touched down at Warsaw’s Okęcie Airport. The delegation onboard would stay no more than eight days, but the visit would change the course of history. The plane was carrying Pope John Paul II, the first Polish pontiff. Ever since his election the previous year, the communists had been tearing their hair out as to how to handle this unexpected arrival on the world stage. Millions would greet the Pope as he toured his homeland. The scale of the gatherings would be unprecedented in the Soviet Bloc.

“We saw each other for the very first time, after decades of communism,” recalled Nina Gładziuk to the Pope’s late biographer Jonathan Kwitny. “We saw we were united. There were millions like us. We discovered community, solidarity and power.”

The following year, the Solidarity movement itself was formed. The Church rallied to the cause, treading a precarious path across many spheres, not least in the arts. Officially banned literature was read in churches, and parish-arranged exhibitions often became the only alternative for painters and sculptors ignored or even boycotted by the state-controlled system of galleries.

Stalin had quipped that imposing communism on Poland was like “putting a saddle on a cow”. That saddle was about to be thrown off. 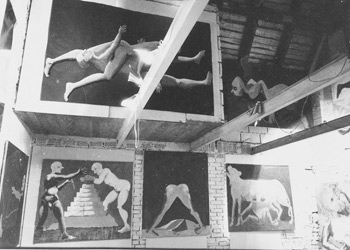 For Marta Tarabuła, an idealistic young art historian from Krakow, a tragedy within the Church proved the catalyst for a new wave of counter-culture in Polish art. On October 19th, 1984, Father Jerzy Popiełuszko, an implacable anti-communist, was murdered by the State Security Services. A huge exhibition entitled “Przeciw Złu, Przeciw Przemoci” (“Against Evil, Against Violence”) was held in protest at the church of Mistrzejowice near Krakow.

Wandering around the show, she was bowled over by two “very strange” paintings. They were by Jarosław Modzelewski and Marcin Sobczyk. After a trip to Warsaw, she persuaded Sobczyk to create the first show for what was to be a new underground gallery, Zderzak (The Bumper).

“At that time, the average standard of exhibitions in Poland was poor,” she recalls. Even in the Church’s exhibitions, “most of the works focused on moral subjects, banally accomplished in accordance with the so-called “socialist realism” taste, or the Impressionist style.

“I wanted Zderzak to be the third way for artists boycotting official art groups.”

Technically, it had been illegal for more than seven people to gather in a public space since martial law was declared in ‘81. Tarabuła’s shows were conceived to last for only three days, so as to avoid heat from the militia. The gallery’s name had to be carefully chosen, as using a tag like “Confrontation” would have amounted to shooting oneself in the foot. But the message of “The Bumper” was unambiguous to insiders.

“Both the gallery’s name and its logo were designed to clearly express an overall sense of clash with the official culture. It was supposed to act as a direct head-butt to the authorities, without making concessions to their programs.”

Despite the careful measures taken, there were run-ins with the authorities. Once, a journalist from an official paper managed to penetrate a show, and a few days later, Tarabuła and her colleagues were interrogated. On another occasion, a radio show let the cat out of the bag. Once again. the militia men came knocking. “But they had no clues to incriminate us,” says Tarabula with a twinkle.

Following Tarabula’s example, clandestine galleries were launched across the country. In Warsaw, Wrocław and Łódź a bunch of daredevil curators began to regularly arrange the so-called “wystawy walizkowe” (“suitcase exhibitions”). Again, these were conceived to be short and sharp, held in underground flats and hastily packed up to avoid house searches by the militia.

Gnomes to the Rescue 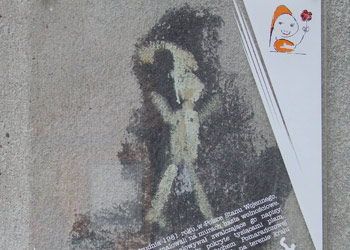 Above: The last remaining Orange Alternative Gnome on Madalińskiego Street in Warsaw

Whilst curators were beating a new path behind closed doors, change was already afoot when it came to guerrilla art on the streets.

On the night of 30 August 1982, the “Orange Alternative” was born, when Waldemar “Major” Fydrych and Wiesław “Kapitan” Cupała painted their first gnomes. For this occasion, two sites were selected on the outskirts of Wrocław: a block in the Biskupin district and an electrical plant in the Sępolno area.

As an exception, the first two gnomes were rustled up with cans of spray paint. The majority would be painted using the traditional brush technique, with oil colours borrowed from friends studying art in Wrocław. “It was a true ritual. Firstly we had to squeeze the paint tube. Then we could slowly lay the colour with a brush. Not like the current graffiti technique, one or two layers of spray and all done,” explained “Kapitan” Cupała, some years later to a local newspaper.

Within two years, all of the major cities in Poland were covered with thousands of gnomes. Fydrych accomplished the most successful viral campaign in the Eastern Bloc. From this moment, “Major” would completely dedicate himself to the second stage of his project: the involvement of Polish youth in street happenings aimed at ridiculing the communist authorities through frivolous slogans and carnivalesque – but above all peaceful – performances.

The Orange Alternative joined forces with the subversive Ruch Społeczeństwa Alternatywnego (“Movement of Alternative Society”), established in Gdańsk. “We formed underground discussion clubs all over the country, distributing flyers with information about RSA activities which also included ‘Hyde Park’, the first alternative youth summer camp in Poland,” says the showman Krzysztof Skiba, a co-founder of the first anarchist organisation in Poland. During the eighties, several RSA members, including Skiba himself, spent long stretches in prison after clashing with militia forces during public protests. This did little to dampen their spirits.

Meanwhile, having started with a series of small-scale happenings mainly attended by local artists and a few passers-by, the Orange Alternative became hailed internationally through legendary actions such as the free distribution of toilet paper – then rarer than flying hedgehogs – at Wrocław’s Open Theatre Festival in 1988. This happening was followed a year later by a public dispensation of women’s sanitary towels, which led to Fydrych being sentenced to three months in jail.

The “Orange Way” of ridiculing the decaying system represented a valid alternative to both urban guerrilla tactics and the Gandhian “satyagraha” practice of non-violent resistance. On 1 June 1988, the movement reached its climax with the so-called “Revolution of Gnomes”, a peaceful but frisky march in Wrocław attended by more than 10,000 people wearing elf hats with optional tassels sewed according to Major’s guidelines.

Yet the end was now tantalisingly close. In the spring of 1989, the Round Table Agreement was signed and the power of the general secretary of the Communist Party overturned, leaving the Orange Alternative with no enemy to fight. Polish students and workers could now mobilise themselves without the fear of being arrested by militia men. A regular police force was installed.

Due to all this, “Major” decided to take a decade off to think things over. “I wanted to discover the world outside the country I lived in,” he told the Post. “Therefore I moved to Paris, where I spent almost 10 years.” During his stay in France, he did all sorts of jobs, amongst them working as a house-painter.

Yet the gnomes had not taken their final bow. Change was afoot in Ukraine, and in the winter of 2005, “Major” mobilized a new generation of puckish Poles. They travelled by bus to Kiev to join the throngs of orange protesters who had gathered at Independence Square to denounce electoral fraud in Ukraine’s presidential showdown. “I simply coudn’t drop the ball and refuse to take part to that orange carnival,” said Fydrych when asked about his unexpected comeback. Never underestimate a gnome.

Marta Tarabuła still runs the Zderzak Gallery. Nowadays it has a permanent home on Floriańska Street. More info about the Orange Alternative can be found at www.pomaranczowa-alternatywa.org.

See also: Rock Against the Bloc