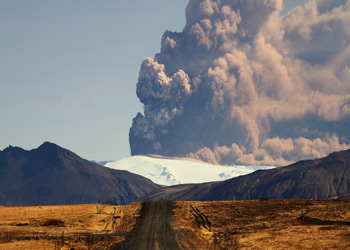 The ash cloud that unfurled last month following the eruption of the Icelandic volcano Eyjafjallajökull led to a paralysis of European air traffic and caused considerable losses for the aviation industry. Polish airlines, airports and travellers were amongst those affected by the volcanic blow-out. Despite initial estimates, the full scale of the costs has still to be accounted for.

After the flight ban was extensively lifted on 21 April, the International Air Transport Association (IATA) made its first estimates. The total losses amount to $1.7 billion in revenue for the international airline community. According to Giovanni Bisignani, CEO and director of IATA, during 17 and 19 April, when air traffic was virtually reduced to zero, airlines faced losses of $400 million per day. On average, airlines lost an estimated $200 million daily during the almost week-long aerial state of emergency.

British Airways, whose losses have been estimated at around $23-30 million per day, Air France-KLM and CSA Czech were the airlines most affected by the closure of European airspace. Despite having lost much less than the top carriers, Polish airlines suffered significant setbacks. Polish airline LOT announced that it had endured a loss of up to five million euro daily. Even though exact figures have not yet been announced by LOT, the consequences of the volcano could be damaging for the state-owned company. Whilst still in the midst of the crisis, LOT’s executive director addressed the Polish government to ask for support. However, evaluations of the losses, as well as deliberations, are still proceeding, and no final figures have been given yet. The crisis-ridden air carrier, with around 3.9 million passengers annually and revenues of $831 million in 2009, had been on the brink of bankruptcy as a consequence of the economic crisis that spread in 2008.

Another aggravating factor that exacerbated the losses and made it difficult to assess their exact amount is the high degree of interdependency between the air industry and other parts of the economy, such as the tourist sector, logistics and the manufacturing industry. Along with inconsistencies in the closing of airspace by the European Union and national governments, airlines were additionally under pressure, as customers waiting for components and deliveries urged the air companies to resume flights.

“Reopening and closing the airspace is damaging for us. We want to know what the reasons are behind those decisions,” LOT’s Chief Executive Sebastian Mikosz declared during the days of crisis. Mikosz’s observation represented in many respects the worries of other airlines. Almost 60 of LOT’s aircraft were grounded around the world, which led to additional costs for airport slots and losses in freight services. Air freight is one of the sector’s most profitable elements and accounts for approximately 20 percent of revenue for airlines.

In addition to airlines, airports were severely affected as well. Polish airports were closed systematically during that week, with the only exceptions being made for military, police and medical flights. The country’s biggest and most frequented airports in Krakow and Warsaw had to cancel thousands of flights, while coping with the continuing costs of operation. The losses of Krakow’s Balice Airport are estimated to be up to one million złoty during three days. Warsaw’s Frédéric Chopin Airport has to reckon with even higher costs.

After the crisis’ peak had been overcome and air traffic slowly resumed, recriminations about the closings were made. The decisions to close the airspace were apparently not based on facts, but rather on computer models, some critics say. On the other hand, the lack of coordination and general inconsistencies during the decision-making has been criticized.

Arguing in analogy to the 2001 attacks on the World Trade Centre and the subsequent efforts made by states to help the airlines financially, IATA’s Bisignani pleaded with European governments to take measures that would mitigate the financial impact. “The scale of the crisis eclipsed 9/11, when U.S. airspace was closed for three days,” he argued. IATA is advocating for airport slot rules to be relaxed, restrictions on night flights to be lifted and unfair passenger care regulations addressed. European ministers of transport are expected to meet in late April and deliberate about the measures to be taken.

The point of care regulations is an especially delicate one as EU consumer rules dictate that airlines must provide food and lodging for stranded passengers. Over 100,000 Polish travellers were stranded all around the world. 1,500 Poles were trapped in holiday resorts in Egypt, Israel and the Canary Islands for days. The prices of hotels and meals caused huge costs for travel agencies and airlines as a result of the airspace closures.