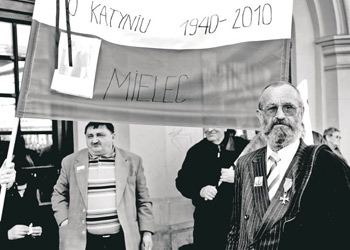 In the aftermath of the presidential plane crash at Smolensk, there have been comparisons to many disasters on the world stage. According to the Aviation Safety Network, there have only been a handful of crashes in the history of air travel involving the deaths of presidents or national leaders, but none can be comparable in scale to the 10 April catastrophe at Smolensk, in which 88 dignitaries perished. A range of hypotheses and speculation continues to circulate in the Polish media as to what really happened on that fateful Saturday morning. Many sources imply that blame should be put on the pilot, who reportedly ignored warnings from air traffic control and attempted to land in dense fog – the weather has repeatedly been described as the decisive factor in the catastrophe. Initial reports said the pilot made three or four approaches before the collision, but these statements were later found to be false. The jet crashed just short of the runway, hitting the tops of trees while descending below the glide slope on the final approach to land. The aircraft was completely destroyed and no one survived the initial impact.

The plane had a Terrain Awareness and Warning System installed that should have prevented it from striking any obstacles on the way, like mountain peaks, radio towers, trees or any other obstruction. If the safety device was indeed functioning properly, it would be the first such accident of an aircraft equipped with the system since its introduction in the 1990s. The system, however, might have been turned off since the old military airport in Smolensk is not properly equipped for it to be used, Col. Tomasz Pietrzak, a long-time commander of the presidential fleet, claims. The first analysis of the black boxes reveals that the pilot was unaware of the altitude the aircraft was flying at.

The shroud of mystery has been thickening as more and more puzzling questions emerge. Tupolev-154 aircraft have been involved in 66 crashes to date, a figure normal for the quantity, years of service and technology of the plane. Furthermore, the model is known among pilots for its robust construction and the ability to land in very extreme conditions, as it had been used by Russian airlines in Siberia for many years. Amongst all the incidents to date, only a few had crashed because of technical failure.

Nevertheless, President Kaczyński had experienced two problems onboard the Tupolev that had jeopardized his safety in the past. The aircraft’s steering mechanism delayed his departure from Mongolia in 2008, forcing him to catch a charter flight to Tokyo, and a week later the plane was caught in dangerous turbulence during its journey to Seoul.

Over the last 10 years, Poland has witnessed several Air Force catastrophes, including the accident of a Mil Mi-24 helicopter carrying Prime Minister Leszek Miller, and the tragic crash of a CASA aircraft that resulted in the death of 20 top Air Force pilots two years ago. Some military and aviation experts have indicated that since that time, no measures have been taken to prevent similar occurrences in the future. They accuse the Polish authorities of negligence, lack of competence, and arrogance, which according to them is behind the Smolensk catastrophe. There had been repeated calls for political leaders to upgrade their planes, but all contracts for new planes had been cancelled. The Ministry of Defence, responsible for the safety of government officials, claims that all strict procedures concerning the flight of the presidential plane to Smolensk were followed.

Fairly or unfairly, Minister of Defence Bogdan Klich, a doctor of psychiatry, has been singled out as the key figure responsible not only for the crisis in the system of national defence but also for the strategy in the investigation which is now under Russian control. It is a Russian commission that will issue the final report of the catastrophe.

The Chief Military Prosecutor’s Office and General Public Prosecutor’s Office have issued a statement in which they point out four initial directions from which the investigation will follow: the crew’s errors, technical failure, a third party’s action (assassination or pressure from the cabin), poor organization and flight protection. In the meantime, Polish investigators have received satellite pictures of the catastrophe site from the U.S. Despite the fact that more than two weeks have passed since the accident, investigators still don’t know the exact time of the crash.

An embarrassing criticism from the victims’ families has been levelled against the Polish government. According to the relatives, the government is doing little or nothing in order to expose the true nature of what really happened in Smolensk.

Prime Minister Donald Tusk appealed to MPs and journalists to restrain from making speculations or delving into conspiracy theories concerning the catastrophe. Mr. Tusk also warned against using the disaster for political gain in the upcoming presidential campaign.

In late April, the Huffington Post revealed that the ongoing investigation might be hampered because of political pressure being exerted due to unusual circumstances – the tragic death of the president and the whole range of top military officials on the territory of a foreign country. If the investigation concludes that a Russian flight controller’s error or the faultiness of the navigation equipment at the Smolensk military airport is the main cause of the crash, it will almost certainly harm Polish-Russian relations.

Immediately following the catastrophe, however, the Polish mainstream media noted a rush of warm feelings from Russians and an outpouring of sympathy and compassion from Russian leaders. “This is of course first and foremost Poland’s tragedy and that of the Polish people, but it is also our tragedy. We mourn with you,” Prime Minister Vladimir Putin said in an interview with Polish television. It is possible that the tragedy can have a positive impact on the strained, emotionally charged Polish-Russian relationship. Some newspapers have pointed out that this process may even lead to reconciliation between the two countries after the centuries of historical animosity. The tragedy has already opened a broader dialogue about the 1940 Katyń massacre, first with the unprecedented showing of Andrzej Wajda’s film Katyń on Russian state television, to a reported three million viewers. This was followed by the publishing of documents on the Katyń massacre on 28 April, which had previously only been available at the request of specialised researchers. For years, the Polish government pressed Russia to release the files to the public. Now they have been published in full online. According to the BBC, this was at the direct request of Russian President Dmitry Medvedev.

The wartime murder of 22,000 Polish officers and intellectual elite by the Soviet secret service was a continuously open wound and the constant denial of Soviet responsibility by the Russian authorities held Polish society in a psychological state of tension, frightened of the true intentions of Russian leaders.

The way this disaster will affect relations between both countries will profoundly depend on how Russia conducts the investigation into the tragedy. The ultimate reports surrounding the circumstances of the crash and the few seconds beforehand, if accurate, would certainly help to clarify all doubts concerning this event.