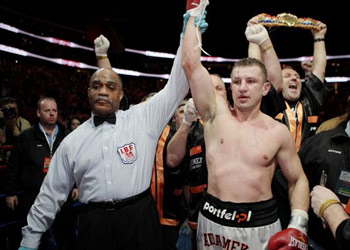 When Tomasz Adamek was asked why he chose to relinquish his world championship belt to fight as a heavyweight, his trainer cracked: “Hunger.” In fact, when he fought two classes lower, he would lose as much as 15 pounds for the weigh-in. Joking aside, the real hunger that drove Adamek’s move won’t be satisfied until he has accomplished what no other man ever has in the history of the sweet science: to have held world titles in all three top weight classes.

He took a major step forward on the road to that goal on Saturday, 24 April at the Citizens’ Business Bank Arena in Ontario, California by beating Chris “The Nightmare” Arreola on points in his second heavyweight bout, which he described as “the toughest fight of my life”.

Two Poles, one Poland to fight for

While his fight record shows Adamek to be the most successful Polish boxer in a generation, he has received less attention than the sometime title hopeful Andrzej Gołota, principally because the hulking Gołota fought in the limelight of the heavyweight class. Gołota – eight years Adamek’s senior – had his own shot at the title, only to see his career slide after being involved in some notably ugly incidents.

Gołota’s first shot ended in a sickening circus of race baiting and violence, partially orchestrated by fight promoter Don King. His fight against Riddick Bowe in 1996, attended by thousands of flag-waving Poles at New York’s Madison Square Garden, was called to a halt after Gołota’s fourth crushing blow to Bowe’s genitals. The house erupted in pandemonium as Bowe’s handlers attacked Gołota and his entourage with huge, heavy, 1996-sized mobile phones, while a race riot exploded in the stands. When they met again a few months later, Gołota was again disqualified. He had earned the derisive nickname “The Foul Pole”.

Gołota continued to enjoy support in Poland, but never achieved the greatness that Poland longed for. Adamek’s career flowered in the meantime, and in contrast to Gołota’s reputation for cheap shots, Adamek grew in esteem as a tough, determined, and focused fighter. He won the WBC light heavyweight title from Paul Briggs in 2005, then lost it again in to Chad Dawson in February 2007, marking his first career defeat.

Amid speculation that he was beyond his peak, Adamek raised eyebrows announcing his decision to fight bigger opponents at cruiserweight, where he proceeded to flay Luis Pineda, ending his first fight at the heavier class with a seventh-round TKO, then went on to take the world championship title from American Steve Cunningham in a dramatic battle with aggression on both sides worthy of a Rocky movie.

With an eye to establishing himself as the definitive representative of his homeland in boxing, Adamek chose to move up in weight class again and announced his decision to abdicate his title to fight Andrzej Gołota.

At stake in the fight between the two Poles was more than the largely meaningless IBF International Heavyweight Belt and the Polsat Belt, invented by a Polish television station for the occasion; the venue in Łódź meant that it would be broadcast live on Polish TV before a breathless Saturday night audience.

At weigh-in, the difference between the two was nearly 20 kg (44 lbs). When the bell sounded, Adamek, undeterred, proceeded to systematically dismantle the lumbering Gołota with what the feverish Polsat commentator described as a “hurricane of blows”. After a technical knockout in round five, the bleeding and dazed Gołota, unable to defend himself, had conceded to Adamek the support of a nation of 38 million.

Having shown his countrymen that he could handle fighters much bigger than himself, the real test in the international fight world lay ahead. The Adamek camp scheduled his next appearance against Chris Arreola, and the boxing press concurred that the winner would be scheduled to fight for a major belt soon afterwards.

The consensus was also that “the Nightmare” would trounce the smaller Adamek, who trained in isolation in New Jersey.

Then tragedy would deal two heavy blows. On 17 February, five of Adamek’s friends visiting from Poland, including two children, died in a private plane crash. Two months later, Poland and the world were shocked by the tragedy in Smolensk.

Adamek spoke out publicly about the air catastrophes, dedicating his fight to his country. When asked how it would influence his training and upcoming fight, he said with characteristic stoicism, “We are Polish. We are strong. We go on.”

On 24 April, he stepped into the ring with Chris “The Nightmare” Arreola. Twelve rounds later, he was a top contender for heavyweight champion of the world. Analysts and commentators are still voicing their doubts about his readiness, but then, Adamek should be used to that by now.