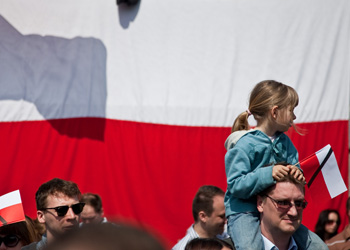 For those that lost loved ones on the 10 April flight to Smolensk, coming to terms with the disaster will be no quick and easy process. Most prominently, it will soon become clear if Jarosław Kaczyński is capable of leading a sound campaign in the wake of such grievous personal loss, and indeed whether that very loss turns to his advantage. However, for the general public, the initial shock of last month’s events has now subsided, allowing for a calmer reflection on what happened.

Whilst there was intense shock in Poland, barely a week after the crash, numerous media outlets felt the obligation to ponder whether the press had over-exaggerated the depth of national grief, following criticism from sections of the public. Foreign Minister Radek Sikorski, who knew virtually everyone aboard the flight (including friends and political foes), felt it necessary to note in the British press that the mood in Poland was not hysterical, and had “more in common with the death of the Queen Mother” than that of Princess Diana. The Kaczyński brothers had endured endless mockery in the press prior to the tragedy. When disaster struck, perhaps nervous of misjudging the public mood, the press changed its tone to one of adulation. However, the loss of some 88 leading figures was keenly felt in many circles. And the reactions highlight some traits that were already apparent, if not understood in the wider world.

One of the most telling reactions to the tragedy could be found in both Poland and amongst the Polish diaspora, not least in London, which lost the much-loved last president of the government-in-exile, Ryszard Kaczorowski. It was Mr. Kaczorowski, symbol of the wartime exodus, who had brought the insignia of state back to Poland after communism fell in 1989. Amidst the initial shock, the immediate reaction amongst many Poles across the world was that at least the world would now finally be awakened to the truth of Katyń. “I will put this brutally,” Minister Sikorski said on 15 April, as television stations across the globe began screening Andrzej Wajda’s Katyń film. “This is a triumph for our political memory. We have reminded the world about Katyń. But we are paying a high price for this.” How should foreigners digest this thinking?

The Katyń referred to is the 1940 Soviet massacre of Poles, a tragedy which by grotesque fate, President Kaczyński’s delegation was flying to commemorate last month. There exists a strong conviction amongst Poles that the West turned its back on the murder of 22,000 members of the Polish elite (Katyń was one of several execution sites) out of a need to appease Stalin, then a more powerful ally than Poland. “We have, in fact, used the good name of England to cover up a massacre,” concluded a suppressed British report by Sir Owen O’ Malley in 1943. The corollary to this is that it is widely felt that the West “betrayed” Poland by failing to stop Stalin from setting up his puppet regime in the country. This sense of martyrdom bubbled back to the surface last month.

Whilst the general atmosphere at President Kaczyński’s funeral in Krakow was calm, predictably, many remained unconvinced by the volcano-related cancellations of countless delegations. “1940 – 2010: Poland is alone again. Where is Sarkozy? Barroso? Obama?” challenged a placard in the crowds.

As it was, Poland’s sensitivity about being left in the lurch was best-expressed by a foreigner. The most outspoken words of the day came from Czech President Vaclav Klaus, head of another former Eastern Bloc nation: “I can understand that the Canadian premier or the governor general of Australia [was not able to come]… but the fact that that no one came from Brussels is unforgivable to me,” complained the Czech leader. “It proves that all this talk of European unity is just empty words.”

This sense of victimhood, and of being treated as second class Europeans, is fundamental to the political outlook of many Poles. Lech Kaczyński was very much a product of that mindset. Distrustful of foreigners, he was keenly aware of his country’s perceived martyrdom. As a veteran of the Solidarity movement, and one who was imprisoned for his stance, he emerged bruised from the fight. He was no suave PR man. The mission of his party was to reverse the “wrongs” of the communist regime. In his mind, he was loyal to the legacy of Poland’s WWII underground army, of which his father-in-law was a prominent veteran.

Although during his presidency Kaczyński was widely portrayed in the Western press as an uncompromising reactionary, his last, unread words were notably optimistic. His planned address for the 10 April memorial at Katyń struck a conciliatory note in the explosive realm of Polish-Russian relations. “Katyń became a painful wound in Poland’s history and poisoned relations between Poles and Russians for many decades to come,” he wrote.

“Let us allow the Katyń wound to finally close over and heal,” he continued. “We are on that road. As Poles, we appreciate the actions taken by Russians in the last few years. We should proceed on the road that is bringing our two nations closer to one another. We must not stop or go back in our tracks.”

As it was, the crash did appear to prompt a positive breakthrough in Polish-Russian relations. On the Monday following the disaster, there were even denouncements of Stalin in the Kremlin. President Medvedev was one of the international leaders who succeeded in attending the funeral. Russia then published a batch of previously classified files on Katyń. Andrzej Wajda’s film was aired on a major Russian TV channel. Many Russian military cemeteries have now been cleaned up by Poles as a conciliatory gesture.

Meanwhile, although he expressed satisfaction that the world had been reminded of Katyń, Minister Sikorski alluded to the dangers of national martyrologies: “We don’t want to be a nation that only finds its pride in martyrdom. We want to take pride in being a modern and prosperous state,” he affirmed.

The Kaczyńskis were raised in the acute awareness that recent Polish history was an “open wound”, as author Andrew Tarnowski put it. But times are changing. Today’s teenagers have been spared the extremes of previous generations. It’s unforeseeable what tremors the world may bring over the next decades. But at the moment, young Poles are being brought up in a climate of relative stability. This means that the pain of Poland’s past will be viewed through less wounded eyes, and that the sense of martyrdom will lessen. An air of greater impartiality may accompany the discussion of events of both national pride and shame, echoing Kaczyński’s unread Katyń address.

As historian Adam Zamoyski reflected in a recent interview with the Post: “Poland’s long Second World War of 50 years is over, and Poland is a perfectly successful country… in many ways it’s a happier society than a lot of western societies.”