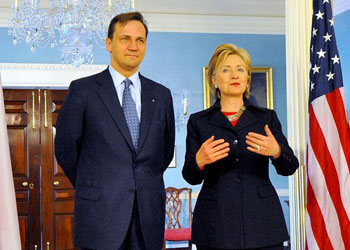 U.S. Secretary of State Hillary Clinton has promised to look into the issue of Poles requiring visas to enter the United States after a meeting with Polish Foreign Minister Radosław Sikorski. The two officials met in Washington, D.C. on Thursday as part of a Polish-American strategic dialogue.

Earlier this week, European Parliament President Jerzy Buzek criticised the U.S. visa policy, which divides EU member states into “better” and “worse” countries according to which ones are included in the Visa Waiver Program (VWP). Buzek pointed out that “this is an element of the inequalities that exist within the EU,” and asked that the matter be resolved as soon as possible.

Now, Minister Sikorski has told the Polish public that he informed Secretary Clinton that Poland is the only member of the Schengen zone that is not included in the VWP. “I had a feeling that it made a big impression on the secretary of state. She promised to ask the American consular services to look into this issue again,” he stated. Sikorski also stressed that for the time being, the American consular services should grant more visas for Polish citizens, but at the same time, Polish citizens should obey American laws and not overstay their visas.

The official criteria to enter the VWP is based on the ratio of rejected visa applications to total visa applications, which must fall under 10 percent. At the moment, the figure is at 13 percent. If the number of visas granted were to increase, Poland would soon be within range of entry into the VWP.