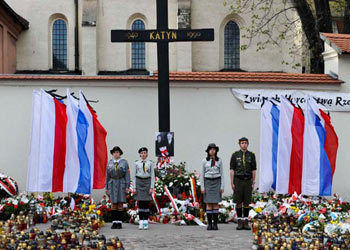 For the first time, the Russian authorities have published documents on the Katyń massacre that had been kept secret for over 60 years. The massacre, in which 22,000 Polish officers were killed by the Soviet secret police in 1940 in the woods near Katyń, western Russia and two other sites, was denied until the very end of the existence of the Soviet Union.

After 1991, the documents, labeled “Packet No. 1”, were declassified, but were still only available at the request of specialised researchers. For years, the Polish government pressed Russia to release the files to the public. Now they have been published in full online. According to the BBC, this was at the direct request of Russian President Dmitry Medvedev.

Many people in Poland will see this as an important sign of improvement in Polish-Russian relations, which have warmed since the showing of support Poland received after the death of President Kaczyński in a plane crash on 10 April. Right before the tragic accident, the prime ministers of both countries marked the Katyń anniversary together for the first time.