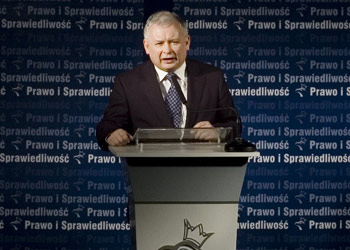 The party of the late President Lech Kaczyński, who died in a plane crash on 10 April, has chosen its candidate for the 20 June elections: former Prime Minister Jarosław Kaczyński, the president’s twin brother.

The conservative Law and Justice (PiS) party was founded by Jarosław Kaczyński and his brother in 2002, and he presently serves as its chairman. The 20 June election will pit Mr. Kaczyński against the speaker of the Sejm (parliament) and current acting President Bronisław Komorowski of the Civic Platform (PO) party, who has taken the lead in early polls.

Jarosław Kaczyński holds a Doctor of Law degree from Warsaw University. He served as prime minister of Poland from June 2006 to November 2007, when his party lost the election to Donald Tusk’s PO party.