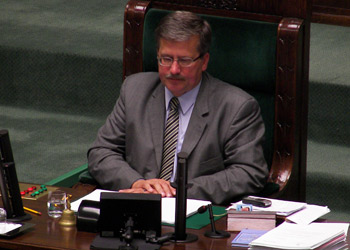 Though the election date was tentatively set for 20 June last week after the death of President Kaczyński, acting President Bronisław Komorowski signed the required documents this morning, making the date official.

Two recent polls have placed Komorowski ahead over any potential candidate from President Kaczyński’s party, Law and Justice (PiS). A poll published by the Fakt daily sampled 1,000 people and found that 55 percent support Komorowski, over 32 percent for a PiS candidate. The Super Express tabloid put Komorowski ahead with 39.3 percent, against 18.2 percent for the late president’s twin brother, Jarosław Kaczyński, who has not announced whether he will be running in his brother’s place. Both polls were conducted 19 April, the day after the funeral of the late president and his wife.

Acting President Komorowski won the Civic Platform primary by beating Foreign Minister Radosław Sikorski last month. Though Jarosław Kaczyński is the leader of the PiS Party, he has not yet named a candidate for the presidential elections, though that decision is expected by this Saturday. If neither candidate receives a simple majority in the 20 June first round, a second round will be held on 4 July.

Before the tragic accident that killed President Kaczyński and 95 others in western Russia, the election was to be held in October of this year. However, according to Polish law, an election to choose a new president must be held within 60 days of the death of the incumbent.