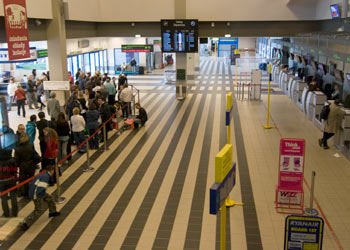 Despite several reports that European transport ministers are working to ease the ban on air traffic today, most travellers in Poland have felt little relief as airports remain closed to commercial traffic.

At 7 am this morning, the Polish Air Navigation Services Agency announced that Polish airspace is closed to commercial traffic once again. This comes after an interval of about six hours in which traffic resumed yesterday afternoon. At the moment, only military, police and medical crafts are allowed to take off and land in Poland.

This morning at 3:50 GMT, LOT Polish Airlines cancelled all of its scheduled flights until midnight GMT today, and are expecting more disruptions throughout the week. The airline is losing up to five million euro per day, and has requested aid from the Polish government to help it cope with the losses.

Budget airlines have also extended their cancellations. Ryanair extended theirs to 13:00 GMT Wednesday, 21 April. Wizzair has been operating a very limited schedule since Thursday, and has posted a warning on their website, stating, “Most flights in the next days are full and there is no guarantee that they will be able to depart”. EasyJet has cancelled all flights to and from Northern Europe, including the UK, until at least 19:00 GMT today. All of these airlines are offering refunds or transfers for those whose flights are cancelled.

In the meantime, Gazeta Wyborcza reported today that there are an estimated 1,500 Poles stranded in Egypt, Israel and on the Canary Islands, resulting in huge losses for the travel agencies that booked their flights. While the tourists are stranded, the agencies are providing for their hotels and meals. The ash cloud has caused the cancellation of 24 tourist charter flights so far, mostly to and from Egypt.

The flight cancellations are costing the entire aviation industry at least 200 million dollars per day, as reported by the International Air Transport Association. In Poland, Krakow’s Balice airport alone has lost between 800,000 and one million złoty in three days, with even greater losses estimated for Warsaw’s airport.

The ash cloud spewing from Iceland’s Eyjafjallajökull volcano has paralysed European air traffic for six days now, and even prevented President Obama and several other world leaders from attending the funeral of the late President Kaczyński and his wife on Sunday. Problems are expected to continue as reports show from late Monday that the Icelandic volcano’s eruptions have strengthened, producing a new ash cloud heading southeast towards Britain.