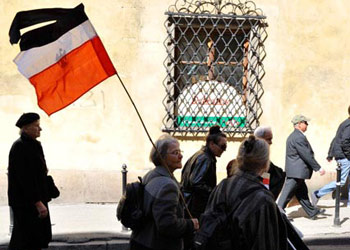 Although the decision about Lech and Maria Kaczyński’s funeral on Wawel Hill stirred up strong and diverse public opinions, the organisers of the memorial had expressed their consent and the funeral proceeded yesterday.

Thousands of people streamed to Krakow’s city centre and to Wawel Castle in order to attend the memorial in honour of late President Lech Kaczyński and his wife, First Lady Maria Kaczyńska, which took place yesterday afternoon.

Parts of the market square, especially around St. Mary’s Basilica, Grodzka Street and the area surrounding Wawel Hill, were barricaded since Sunday morning. Despite having only limited access, crowds of tourists, city dwellers, members and representatives of numerous organisations and associations filled the streets to follow the ceremony, which started with a mass in St. Mary’s Basilica at 2 pm.

An inhabitant from Krakow, having installed himself on a little chair next to the fence adorning Grodzka Street, opined: “Even though the Polish media and press coverage went a bit too far the last days, I think, it is right to have such a ceremony. At least, the majority of the Polish people wanted him to be buried here in Krakow,” he added.

After one week of national mourning because of the tragic plane crash, in which the Polish president and a delegation of eighty-five other dignitaries died, the decision to inter Lech Kaczyński and his wife Maria on Wawel Hill sparked public debate in recent days.

“We cannot completely understand it, why they made such a big deal about him. He wasn’t such a hero as those, who rest in Wawel. If something like this happened in France, people would go on the streets and protest,” a French student couple replied.

According to an elderly woman, dressed in black and carrying two red and white roses, he was an honourable Polish man, who did a lot for the country: “He was fighting with the Solidarity movement for a free Poland!” she exclaimed.
In fact, despite having been a controversial political figure, who represented rather conservative views and values, there seemed to be consensus among the participants that the way the ceremony was taking place is appropriate.