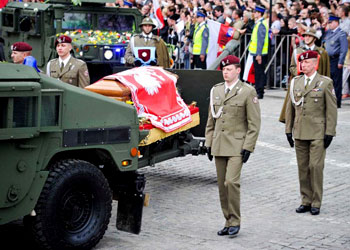 Some fifty international delegations were unable to attend the funeral of President Lech Kaczyński and his wife Maria, owing to the volcanic cloud that continues to unfurl across Europe. President Barack Obama, President Nicolas Sarkozy and Chancellor Angela Merkel were amongst those who abandoned their plans.

However, nature was merciful in one respect. After a markedly wet week, Krakow was bathed in sunshine and the funeral proceeded under a cloudless sky.

The ceremony began in the Basilica of St. Mary’s on the Market Square. The entrance of purple-robed bishops to the strains of Mozart’s Requiem, coupled with the gleaming baroque furnishings, conjured the spirit of the old, 18th century Poland.

The service was led by Archbishop Stanisław Dziwisz, former secretary to Pope John Paul II. Standing behind the two flag-draped coffins, he began by paying tribute to the presidential couple and the other 88 victims of last week’s tragedy at Smolensk.

“We have been deeply moved by the grief shown in Warsaw, in Krakow and across Poland and the entire world over the last few days,” he said.

The doomed presidential delegation had flown to Katyń on Saturday 10th to commemorate 22,000 Poles murdered at Stalin’s orders in April 1940. Today, Krakow’s archbishop urged that the process of reconciliation between Russia and Poland should continue, quoting President Kaczyński’s final, unread address.

“We should proceed along the road which is bringing our two nations closer to one another,” he affirmed. “We must not stop or go back in our tracks.”

The archbishop’s sentiments were echoed by Russian President Dmitry Medvedev, one of the leaders who succeeded in making the journey to Krakow.

Following the Mass, a procession led the coffins down the “Royal Way” towards Wawel Castle, former seat of Poland’s monarchs. A parade of bishops led the way, followed by soldiers, sailors and the late president’s family, including his twin brother Jarosław, and daughter Marta. According to tradition, the caskets were carried on gun carriages. Thousands of Poles lined the route, waving red and white national flags, and casting carnations and daffodils onto the vehicles. A troop of scouts saluted the procession as the marchers passed the Katyń cross, a memorial that was erected in 1990 as the Soviet empire crumbled.

As the mourners passed through the citadel’s gates, Sigismund’s Bell – only rung at times of great national importance – began to toll.

The week had begun with heated debates about whether the presidential couple merited being laid to rest in the Cathedral crypts, which house some of the country’s most hallowed figures. However, by today, the swings of mood had subsided, and there were no visible signs of protest. The city was generally marked by a calm and respectful tone. A short service in the cathedral completed the weekend’s tributes, and mourners will be able to pay their last respects from 8 o’clock this evening.