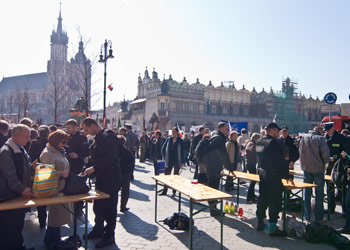 Following yesterday’s memorial ceremony in Warsaw for the 96 victims of the plane crash in Smolensk, Russia, memorial ceremonies continue today in Krakow, with the funeral of Lech and Maria Kaczyński.

Due to the gravity of the event and the large number of important political and diplomatic figures expected from around the world, security is very tight around the Main Square and the Wawel Castle. Most businesses in the Old Town are closed for the day, and tram and bus traffic around the Planty area has been rerouted, though travelling by public transportation is free throughout the day. Only those with official passes will be allowed to enter the Market Square and Wawel areas. Those without a pass to watch the events on the screens in the Market Square will be able to watch on a screen erected on the Błonia Common.

Krakow’s Balice airport is closed completely except for air traffic related to the funeral ceremonies. Around 40 planes from the delegation are expected from the morning on, though many world leaders have already cancelled their trips due to the danger of flying through the volcanic ash covering large parts of Europe.

The schedule of events today is as follows:

10:00 am: Military plane carrying the bodies of Lech and Maria Kaczyński arrives at Balice airport in Krakow.
11:00 am: The coffins of the presidential couple are transported to St. Mary’s Basilica.
12:00 am: Mass on the Błonia.
2:00 pm: The funeral mass begins at St. Mary’s Basilica.
3:30 pm: End of mass, followed by a funeral procession down Grodzka Street to the Wawel Castle.
4:30 pm: Liturgical farewell to President Lech Kaczyński and his wife in Wawel Cathedral conducted by Cardinal Stanisław Dziwisz. Immediately following the ceremony, the coffins with the bodies of the presidential couple will be carried to the crypt and laid to rest in the sarcophagus.
5:15 pm: A ceremony will take place in the Wawel Castle courtyard in which family members of the deceased, state authorities and the heads of foreign delegations will give condolences.
8:00 pm: Crypt is open for viewing for anyone who wishes to pay tribute to the presidential couple. Those coming are asked not to bring candles or flowers.