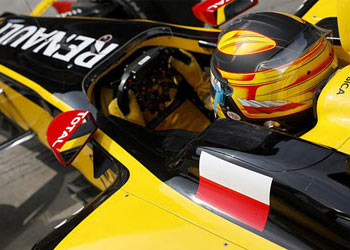 Polish F1 driver Robert Kubica will be driving on Sunday for Team Renault in the Grand Prix of China wearing symbols of mourning on his suit and helmet; the Shanghai race will begin five hours before the funeral of the late president of his home country in Poland. This will be the fourth Grand Prix this season, and Kubica has performed well above expectations and drawn glowing praise in the last two races, where damp weather has produced opportunities on which the Pole has capitalised with his characteristic calm and precision. Broadcast of the event has been cancelled in Poland in honour of the victims of the air tragedy and the presidential funeral.

With no sporting events to be held in Poland during the official grieving period over the eight days following last Saturday’s shocking plane crash, which claimed the lives of 96 people including many key public figures, Kubica will nevertheless be going forward with his start in Shanghai Sunday, and is reported to be planning to race wearing a black armband and helmet with a Polish flag with a black ribbon emblazoned on the front. Kubica spoke publicly about his own feelings and extending his condolences to his countrymen and those impacted by the catastrophe:

“I am deeply shocked by what happened. This is a tragedy never before heard of for our nation. The day which was to be one of remembrance for the victims of Katyń has become one of the darkest possible for Poles. I wish to convey my most sincere condolences to the families of the victims. My thoughts are with those who have been touched by this tragedy.”

While the talk in the F1 community has been about teams Red Bull, McLaren, and Ferrari, the China GP presents Kubica with another opportunity to show his championship mettle and help push team Renault toward the top of the constructors’ standings.

Red Bull has so far been able to produce unapproachable quickness, but has been plagued by breakdowns, and suspicion has been swirling around illegal car height adjustability that their cars have been alleged to be capable of, while Ferrari remains at the top of the standings. McLaren’s mysterious and controversial duct system may give them an edge, as it will allow them to adjust the cars’ properties between the curvy bits and the straight ones — the major challenge in Shanghai with its long straights ending in tight corners. Renault and Kubica meanwhile have been threatening from just behind the leaders since the Pole finished with a startling second place in Australia. Renault lacks the pace to win in dry conditions, but projected rain on Sunday would create overtaking opportunities and mistakes, giving dark horse teams chances to seize valuable points, and viewers an exciting spectacle.

That spectacle will not be televised for Poles in any case, as Poland’s licensed F1 broadcaster, Polsat, will not be showing the race in deference to the victims of the air disaster and in recognition of the national mourning which will remain in effect until Sunday night. Piotr Nurowski, a member of Polsat’s supervisory board and president of the Polish Olympic Committee, was among those killed in Saturday’s crash.