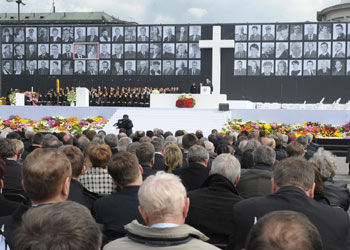 Bells and sirens rang out across Warsaw at noon today, as the memorial proceedings for the late President Lech Kaczyński and 95 others killed in a plane crash a week ago began in Warsaw.

The memorial ceremony began on Plac Józefa Piłsudskiego in Warsaw, which was packed with people paying their last tribute to the late president, his wife, and the other government and military officials who perished. Those attending include the victims’ families, foreign delegations and ambassadors located in Warsaw, as well as representatives of Polish cultural and governmental institutions. The ceremony began with the reading of the names and positions of the 88 Polish dignitaries who died in the crash near Smolensk.

The state ceremony will be followed by a memorial mass at the same Piłsudski Square for the victims of the crash at 1 pm. In the evening ceremonies, beginning at 5 pm, the caskets containing the bodies of the president and the first lady will be moved from the Presidential Palace to the Warsaw metropolitan church. A mass in the church will follow at 6 pm, presided over by Archbishop Kazimierz Nycz, the Metropolitan Bishop of Warsaw.

Tomorrow, the funeral proceedings for the late president and his wife will continue in Krakow, beginning at 2 pm at St Mary’s Basilical and continuing on to the main ceremony at Wawel Castle.

The entire memorial ceremony will be broadcast on all of the national Polish television stations.