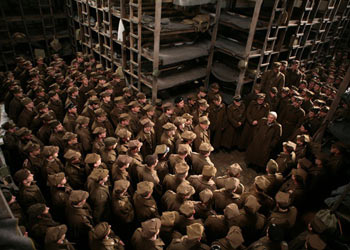 A global Polish community, centred around a group formed on the social networking site Facebook, is pressing the BBC to screen the film Katyń by Polish director Andrzej Wajda.

A spokesperson for the group, Paul Dabrowa, a campaign organiser and candidate in the European Elections in 2009, stated this morning: “In the space of 24 hours, more than 4000 people across the world have joined a Facebook group dedicated to the exhibition of the film. Thousands of emails have been sent to the General Manager of the BBC, with one BBC Radio program receiving such a deluge of calls, they needed to turn off their phone lines.”

The group has asked its members and supporters to send a letter to the BBC (and other networks around the world). The letter urges the BBC to screen the film because it “has important connotation for Poles at this time of grief”. It continues: “The first Katyń tragedy was a low-point of 20th century madness; the second embodies hope. Another generation of Poland’s political elite was devastated but this time Russia and the world is making a remarkable effort to demonstrate support and exorcise past deceits; it has ordered that the film Katyń be screened prime time on national television. Britain has always stood beside Poland and we thank you.”

On Sunday evening, 11 April, in an unprecedented show of solidarity, the Russian national television network screened the film following the tragic death of President Lech Kaczyński and 95 others in a plane crash near Smolensk. The film was watched by an estimated three million Russians.

Katyń was also screened at the European Parliament on 13 April. Television stations in Italy, Macedonia, Lithuania, Ukraine, Portugal, the U.S., and Canada have also expressed an interest in broadcasting the film.

A Facebook page has been created to encourage the BBC to change their stance, with information and updates, located at http://www.facebook.com/group.php?gid=111890122166770&ref=mf.