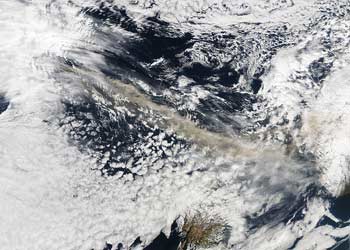 The ash cloud from the eruption of an Icelandic volcano has snarled European air traffic, closing 12 major cities and leading to discussions about possibly postponing Sunday’s state funeral in Krakow.

All Polish airspace has been closed, including Krakow’s John Paul II (Balice) airport. Across Europe, some of the largest airports also were closed, including London’s Heathrow, Charles de Gaulle in Paris and Amsterdam’s Schiphol. The airports are advising travelers to check with their airlines directly.

There are differing accounts about whether the funeral may be postponed. But with nearly 100 dignitaries from countries around the world, including U.S. President Barack Obama and heir to the British throne, Prince Charles, expected to attend the funeral, air travel is essential.

Meanwhile, hundreds of thousands of travelers are stuck in airports or in hotels and waiting on word for when the airports might reopen.

The cancellations are due to the fine volcanic ash cloud that is in the layer of the atmosphere where jet airplanes typically operate, which if drawn into the plane engines, can lead to failure.

As of Friday morning, the volcano beneath the Eyjafjallojokull glacier near Reykjavik, Iceland, was continuing to emit the ash, leading most airports in northern and parts of western Europe to cancel flights with no definite time to reopen.