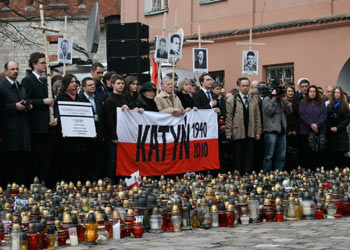 As the week of national mourning proceeds, more details about the presidential plane crash have come to light, and the bodies of the victims are returning back to Poland as the preperations for the funeral ceremonies are under way.

According to a first analysis by the joint investigation of Russian and Polish experts, pilot error is assumed to have caused the crash. Two of the three black boxes apparently revealed the information that the pilot crew refused the advice, given by Russian flight personnel, to land at a different airport nearby.

Furthermore, they did not report any technical difficulties with the plane. So far it seems that the plane started two attempts – not four – before clipping the tops of some trees and finally crashing down. However, the last flight data recorder is still being analysed.

During the week Polish military prosecutors opened an independent investigation about the incident to give some additional insight.

Eighty-eight passengers and eight crew members were on board the presidential plane. None of them survived the crash on Saturday morning. The body of President Lech Kaczyński was already flown back to Warsaw on Sunday. Together with his wife, Maria Kaczyńska, whose coffin returned on Tuesday, both of their dead bodies are lying in state at the presidential palace in Warsaw.

At the beginning of the week a large number of the victims had to be retrieved from the wreckage of the plane and an identification process had was begun by forensic scientists. Currently, most of the partially disfigured bodies have been able to be identified. On Wednesday afternoon, a plane took another thirty bodies back to Warsaw. Among those who were repatriated to Poland was the body of the candidate for this year’s presidential elections and former defense minister Jerzy Szmajdziński, Sławomir Skrzypek, president of the National Bank of Poland, as well as Władysław Stasiak and Paweł Wypych from the President’s Chancellery.

This afternoon, the body of the last Polish president in exile, Ryszard Kaczorowski, is to be flown back to Warsaw.

As Poland is still dressed in black and struggles to cope with the tragic loss, preparations for the memorial and funeral ceremonies are already under way. On 17 April in Warsaw, a memorial ceremony will be held to commemorate the victims of the presidential plane crash near Smolensk. It is supposed to start at Plac Józefa Piłsudskiego at noon, to pay the last respects to the victims. After a procession, there will be a mass for the presidential couple at the Warsaw metropolitan church.

The controversial funeral of the late president on Krakow’s Wawel Hill is scheduled for Sunday at 2 p.m. Hundreds of thousands of people are expected to attend the ceremony. Numerous heads of state already announced their participation to pay their last tribute to Lech Kaczyński. U.S. President Barack Obama, German Chancellor Angela Merkel, President of Russia Dmitry Medvedev and several other leaders from important organizations, the region, the European Union and from all around the world will be present.

The impact of the tragic plane crash has been huge on Polish society. The period of national mourning has been extended from ending on Saturday 18:00 to midnight on Sunday night. All around the world, especially in Russia, the U.S. and neighboring countries, such as Ukraine or Germany, political leaders and civil society expressed their condolences and responded with deep compassion to the Polish people.