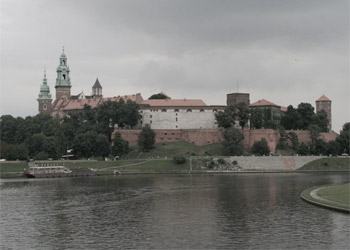 The bodies of Polish President Lech Kaczyński and his wife, Maria, are to be interred in the cathedral on Krakow’s Wawel Hill, the most important national landmark, set in the historic castle which was the seat of the country’s royalty over the centuries.

The cathedral is the final resting place of many of Poland’s kings and national heroes, including wartime president Władysław Sikorski and national bard Adam Mickiewicz. Public response to the appropriateness of the decision was sharply divided along generational and political lines, breaking the atmosphere of unity in grief that had followed Saturday’s plane crash near Smolensk, Russia, that claimed the lives of 96 people. The funeral and interment are scheduled for 2 p.m., Sunday, 18 April, at Wawel.

The decisions concerning the funeral arrangements were made privately by the late president’s family, of whom the immediate next of kin included his daughter and twin brother and member of parliament, Jarosław Kaczynski. The date of the funeral and the wish to make Wawel the final resting place were announced midday on Tuesday, then approved by the Archbishop of Krakow, Stanisław Dziwisz.

Dziwisz, a close confidante of the late Pope John Paul II, told Gazeta Wyborcza: “We consulted throughout the day with top representatives of the authorities and Mr. Kaczyński’s family. I spoke several times personally with his brother, Jarosław. We decided that the most dignified resting place for Lech Kaczyński and his wife would be Wawel.”

The site on Wawel Hill is perhaps the most important religious and historical monument for Poles, and the cathedral is filled with figures dating from the most important chapters in the nation’s history, including Władysław Jagiełło, who united Poland and Lithuania through his marriage to Jadwiga, creating Europe’s largest medieval kingdom. Non-royals buried in the cathedral include wartime prime minister Władysław Sikorski, who as a general turned back an invasion of the Soviet army at the Battle of Warsaw in 1920, and Tadeusz Kościuszko, who led a major but failed uprising to reclaim independence for Poland, and who traveled to America to fight as a brigadier general in the American Revolutionary War.

The decision to inter the Kaczyńskis at Wawel drew immediate comparisons to the other figures buried there and spurred the creation of a Facebook page protesting the decision, which drew 3,000 followers in the first two hours and more than 25,000 by this morning. About 400 people who oppose the decision to inter the couple at Wawel protested in front of the seat of the Krakow archdiocese, where some passersby accused the protesters of being “Russian shills”.

On Wednesday, Poland’s most popular daily newspaper, Gazeta Wyborczya, an adamant opponent of the policies of the former government of then Prime Minister Jarosłąw Kaczyński, opined: “the homage paid to the head of state, the man who died serving his country, is proper, just, and necessary. The decision, however, to inter him at Wawel – while it is painful to say – is rash and emotional. A more fitting place would be St. John’s Cathedral in Warsaw at the side of President Gabriel Narutowicz, who also died tragically”. Narutowicz was assassinated by political opponents in 1922 after only five days in office.

The disagreement over the burial place opened the deep political divide between Lech Kaczyński’s most steadfast supporters and the mainstream of Polish politics, and while public objections have been tactful, they are also revealing about the private assessments of the Kaczyński legacy and its worthiness of such a prestigious memorial. This comes as a break from the broad restraint being exercised during the official period of national mourning.

Poles are having to reconcile their feelings of national unity for their deceased leader with their personal political beliefs about the man. For much of Kaczyński’s presidency he enjoyed at best modest popularity and was particularly disfavored amongst younger Poles, mostly because of his strong socially conservative viewpoints. As well, Kaczyński angered many older political and social activists, such as his one-time Solidarity ally and Nobel Peace Prize winner Lech Wałęsa, with his anti-communist fervor that persisted long after 1989.