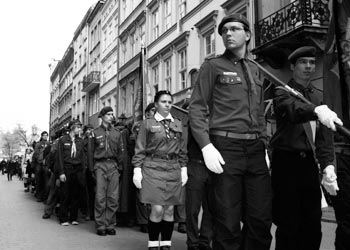 In a march to remember the massacres of Katyń 70 years ago, as well as the victims of the presidential plane crash near Smolensk on Saturday, thousands of people gathered in Krakow on Tuesday to commemorate the tragic events.

Starting on the Main Square at noon the march wound around the Rynek, past the Town Hall Tower, then down Grodzka street before ending at the wooden Cross of Katyn at Plac im. Ojca Adama Studzińskiego at the foot of Wawel Castle. Among the participants there were many representatives from national, regional and local institutions, international delegations, as well as thousands of pupils, students and teachers from the Małopolska region.

Following the Polish national anthem in honor of all the victims, soldiers fired a volley into the air and saluted the victims. One of the event’s organizers, Marek Lasota, the director of the Institute of National Remembrance in Krakow, declared that the march would be a ceremony of silence to remember the casualties of last Saturday “whose voices won’t be heard ever again”.

Cardinal Franciszek Macharski said a prayer for the murdered at Katyń, as well as for the recently deceased who were on their way to Smolensk for a planned Katyń commemoration last Saturday. Also, Cardinal Stanisław Dziwisz was in attendance Tuesday. Earlier, he celebrated mass at St. Mary’s Basilica, during which he had focused on the question of offering forgiveness to Russia for its Soviet legacy as a way to heal Poland’s wounds at Katyń.

Russia has offered full assistance to Poland and the families of those killed in the plane crash. Russian Prime Minister Vladimir Putin personally is leading the panel investigating the crash.

At the Katyń memorial Tuesday, an urn filled with soil from the scene of the accident near Smolensk, as well as flowers and floral wreaths, were lain by Małopolska Gov. Stanisław Kracic, Krakow Mayor Jacek Majchrowski and other participants.

The commemorations of the 70th anniversary of the Katyn massacres, in which 22,000 Polish prisoners of war and other members of the country’s elite were murdered by the Soviet regime in 1940, was terribly overshadowed this past weekend by the plane crash near Smolensk. Because among the 96 victims there were many politicians and military officers of high rank, the crash has become coincidentally symbolic.

Gov. Kracic has announced the late President Lech Kaczyński and his wife Maria Kaczyńska are to be buried in a crypt near the Polish kings at Wawel castle. The funeral is scheduled for Sunday afternoon, though many details have yet to be finalised.