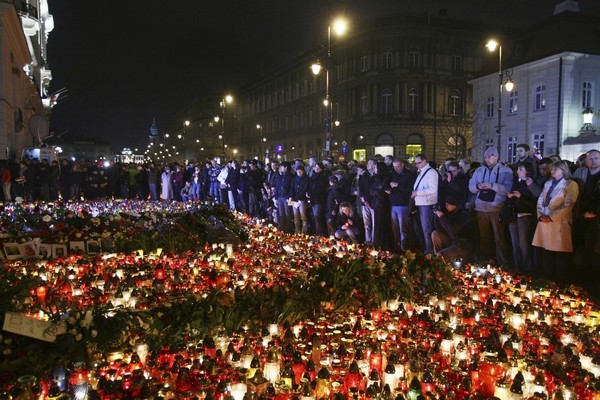 Zygmut’s Bell rang out over Krakow from the tower of the cathedral on Wawel hill on Saturday, announcing the commencement of a week-long period of mourning in the wake of the deaths of the president of Poland, his wife, the heads of the Polish armed forces and many other significant political and intellectual figures in a plane crash en route to the commemoration of the 70th anniversary of the massacre in Katyń. Thousands have poured into public places and churches to light votive candles and mourn the loss of so many top national leaders.

During the mourning period, all public entertainment events will be cancelled, including sporting events, concerts, plays, and festivals.

A moment of silence was observed across the country at noon Sunday. The body of the president will be returned to Poland later in the day.

The disaster is one of horrifying associations for Poles, as the event that the official delegation was set to commemorate was the massacre of thousands of Polish military and intellectual leaders during the Second World War. Poles had contended for years that the killings were committed by the Soviet Secret Services, while the official position of the Soviet leadership was to deny those claims. In 1990, Russian President Mikhail Gorbachev finally admitted Soviet responsibility. Relations between Poland and Russia had remained chilly, in part owing to Polish resentments over Katyń until recent breakthroughs resulting from overtures form Russian Prime Minister Vladimir Putin.

President Medvedev and Prime Minister Putin of the Russian Federation expressed their condolences as Putin prepared to fly to the crash site. Polish Prime Minister Donald Tusk stated that official expressions of grief are being accompanied by a “flood of condolences from all over the world”.

Before the crash of the Russian-built Tupolev 154-M, Poland’s aging fleet of official aircraft, largely dating from the Cold War era, had been involved in other accidents over recent years. Leszek Miller, former prime minister, suffered injuries including two cracked vertebrae in a helicopter crash in December 2003 near Warsaw, attributed at least in part to pilot error. Fourteen others were injured in the crash.

More recently, an air disaster involving a virtually brand-new Spanish-built CASA C-295 claimed the lives of twenty officers of the Polish Air Force in a crash on 23 January 2008, when it hit a tree before reaching the landing strip outside the military airport in Mirosławiec.

Bronisław Komorowski, the speaker of the lower chamber of the Parliament and candidate for president for the governing Civic Platform (PO) is now president of the Polish Republic. Elections, which were already to be held shortly, but must now take place by 20 June as required by the Polish constitution in the case of the death of the president.

Photographs of a memorial in Warsaw:

All photographs by Mateusz Majewski.