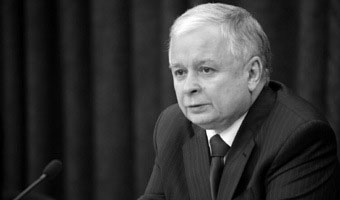 Polish President Lech Kaczyński and at least 95 other people, including his wife, Maria, were killed when their Republic of Poland plane, a Tupolev 154, crashed near Smolensk, Russia, en route to a commemoration of the Katyń massacre in Russia.

Bronisław Komorowski, the speaker of the Sejm, spoke to reporters this afternoon and called on the Polish people to unify and declared a week of mourning. Komorowski has assumed interim control of the presidency.

Prime Minister Donald Tusk was not aboard the ill-fated craft. He updated reporters shortly after 2 p.m. local time, remembering Kaczyński and said he will be flying to Smolensk shortly to meet with authorities there about the accident before returning to Warsaw to manage the government.

Lech Kaczyński was 60. He was born on 18 June, 1949, in Warsaw. He was elected president in 2005 and faced a challenge in upcoming elections.

Mourners are expected to gather around the country to remember the president. In Krakow, a special mass at Wawel Castle will begin at 5:30 p.m.