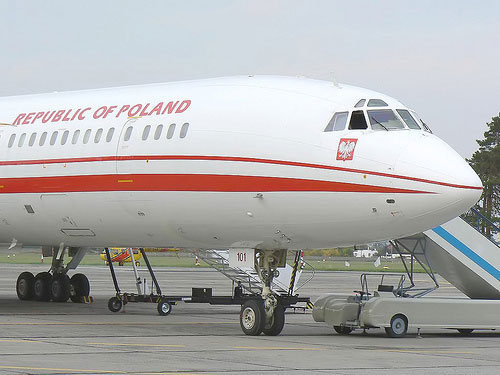 Polish President Lech Kaczyński and at least 96 other people are reported to have been killed when their plane crashed in heavy fog near the airport in Smolensk, Russia, en route to a commemoration of the Katyń massacre in Russia.

Those aboard included a delegation of 88 people, according to a foreign ministry spokesman. It is uncertain the identities of the others of the 96 who died, but likely include crew and possibly some members of the media. The president’s wife, Maria, and many prominent Polish political and business leaders were also aboard.

Bronisław Komorowski, the speaker of the Sejm, is the next in line of succession to the president and is believed to have been notified of the crash and to have assumed interim control of the country’s leadership. Prime Minister Donald Tusk is convening an emergency meeting of the leadership in Warsaw.

TVN is reporting that the plane, a Tupolev 154 Russian-built airplane, apparently clipped trees on its fourth landing attempt in heavy fog and crashed. The number aboard is uncertain because their appears to be several lists, one for the delegation and one for the plane. The Tupolev 154 can carry up to 164 people and this plane’s passenger list reportedly listed as many as 130 people aboard. It is certain 88 people were aboard from the delegation plus crew and perhaps others.

The Polish foreign ministry and the governor of the Smolensk region have said that no one survived the crash.

Among those believed to have been aboard, include:

There had been complaints from Polish media, including TVN, that Russian authorities on the scene are restricting reports from Polish-speaking reporters on the scene, taking notes and cameras. Brief videos from the scene show firefighters battling small fires and rescuers walking the scene as broken and blackened metal from the hull is clearly visible. A red stripe on one hull piece is similar to the red stripe on the Republic of Poland plane.