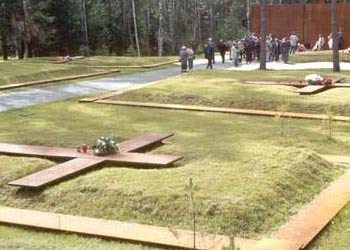 Together, with the families of the victims and in the company of a range of prominent personalities, such as former president Lech Wałęsa, film director Andrzej Wajda and historian Norman Davies, Poland’s Prime Minister Donald Tusk and his Russian counterpart Vladimir Putin marked the 70th anniversary of the Katyń massacre.

Both attended the ceremonies at the Katyń cemetery and at Smoleńsk and give a press conference. In his speech, Putin recognized the massacre of 1940 as a shared memory and thus laid the foundations for uncovering an inconvenient and long suppressed truth: That Soviet soldiers had systematically executed thousands of Poles in the forests near Katyń.

After the Hitler-Stalin Pact of 1939, the Soviets had annexed the eastern parts of Poland. In this process, thousands of officers, soldiers and reservists (but also intellectuals and policemen) had been abducted and imprisoned until the politbureau of the Communist Party of the Soviet Union eventually decided to kill them. The massacres of more than 20,000 people took place in April and May of 1940.

In 1943 the first mass graves were found in a forest at Katyń, which has since served as the symbolic name for the killings, though the massacres were carried out at multiple sites. After the discovery, the Soviets blamed the German Armed Forces (Wehrmacht) for being responsible and created a powerful and pertinacious legend.

This week’s admission was expected to provide a possibly groundbreaking milestone for the frosty Polish-Russian relations and reconciliation, but Putin’s stated remorse is being seen with ambivalence. After all, he had struck an authoritarian note when he took office at the end of the last century and he wasn’t the first to show this gesture of “friendship.” In 1988, Gorbachev had partially given access to the Katyń files – assumedly to support then-Polish leader General Wojciech Jaruzelski when he was hard-pressed by the Solidarity movement. Further, in 1990 Gorbachev admitted publicly the role Stalin’s secret police had played in the killings. Five years later, Yeltsin acted in a similarly symbolic way – at the moment when Poland tried to apply for NATO membership. Putin nevertheless seems to have understood that reproaching the EU over other matters won’t work without first reconciling with Poland.