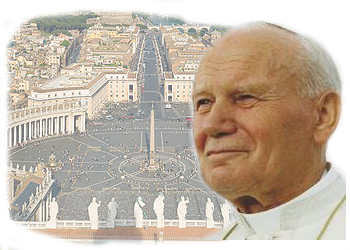 In what has already turned into a national “tradition”, thousands of people throughout Poland honoured former Pope John Paul II in commemoration ceremonies on Good Friday. Along with the Good Friday festivities, such as the “Way of the Cross” procession in Warsaw, candlelit commemorations took place from Wadowice, John Paul’s birthplace, to Krakow, where he once served as Archbishop.

During a speech, current office-bearer Stanisław Dziwisz stressed the emotional symbolism of the coinciding of John Paul’s death and the re-enactments of Christ’s resurrection. With his commitments during WWII and against the communist regime, his dedication to a smooth transition and his overall dialogue with society, John Paul II became the moral leader of Poland.

Even now, five years after his death, his spiritual echo continues to be of utter importance in Polish discourse. It is expected that John Paul II will receive beatification soon, though the current allegations of sexual abuse and cover-ups in connection with the Roman Catholic Church in several countries has pushed the beatification process into the background.

Public attention has turned to current Pope Benedict XVI, who is accused of refusing to take a clear stance in the abuse controversy. In fact, the Pope did not take any official steps of responsibility over the weekend concerning the cases in the United States or Germany, in what appears to have become a global crisis for the church. Instead, one of his top aides denounced the media, accusing it of stirring the matter into a frenzy.

However, even as the church struggles to deal with the current scandal, those involved in the beatification process will certainly do a double-check of John Paul II’s record of combating pedophile activities while pontiff and as Cardinal Karol Wojtyła before proceeding.