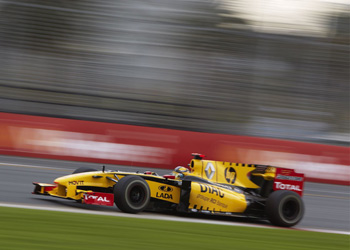 The Krakow Post spoke to its inside connection at the Renault F1 Team, home to Polish racing superstar Robert Kubica, about the current season and what to watch for. Our friend Rob White, Renault’s chief engine man, gave us this outline of key developments for 2010. We have provided more details concerning the teams, drivers, events, and technology in part two of this guide.

FORM
– Last year’s championship was marred by a rules interpretation fuss at the start of the year (“double diffusers”). Brawn GP (Mercedes engine) had the early advantage due to this. Red Bull Racing (Renault Engine) had the best “conventional diffuser” car. The big two of Ferrari and McLaren (Mercedes engines) were nowhere at the beginning of the year. McLaren made more progress than Ferrari, but were still behind Red Bull at the end of the year. Brawn GP won both championships (constructers’ and drivers’), and Red Bull were second but had the fastest car at the end of the year.
– Start of 2010, Red Bull continue their momentum and had the fasted car at the first GP in Bahrein. Ferrari was close behind then McLaren. The big two “on the rebound” look competitive this year.
– Renault F1 had a terrible year in 2009 (8th in championship, “crashgate” scandal) and seek to find respectability in 2010. Kubica takes the place of Alonso and is already at home in the team. He is quick and a great team player. Vitaly Petrov is his teammate, and though inexperienced, is a promising newcomer who acquitted himself well in his first GP.

– No refuelling means races may be less eventful (due to no strategy variation)
– Fuel consumption is important this year (Car minimum allowed weight is without fuel, i.e. if consumption is bad, car is heavy at start of race due to extra fuel load).
– This year’s rules fuss is about McLaren’s rear wing. They have invented a device to reduce drag at high speeds by stalling the rear wing with a driver-operated control. Although clearly against the spirit of the rules, McLaren have convinced the FIA that it complies with the letter of the rules. Others are now rushing around to copy the device!
– Tyres are the main factor. There are two types: prime and option. In general, options are softer and go off a bit quicker than primes. In real life, the tyres are very “safe” and do not go off or wear out. The consequence that the cars qualify in order of car performance… and the race is processional. Overtaking opportunities may be rare except for mistakes or other racing incidents.
– Most races without incident will be 1 stop strategy.
– For racing interest pray for rain!
– The Renault seems quite good in Australia and all are hoping for a good result from Robert (Kubica).

Our thanks to Rob White, Renault’s chief engine man for the tips.