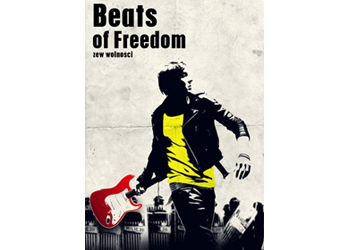 Telling a story from an unexpected angle is often a winning formula. Last month, Bartek Konopka narrowly missed an Oscar for his saga about the Berlin Wall, as seen through the eyes of rabbits. Now we have Beats of Freedom, which ponders how Polish punks rocked the Bloc.

The film may sound like a nice excuse to show reels of tanks inter-cut with blokes with fantastic haircuts, but here the directors have a strikingly rich seam to mine. In the Poland of the early eighties, just being in a band often amounted to a political statement. Besides the mundane problems of trying to procure a decent pair of biker boots – virtually impossible in Poland – lyrics were censored, groups were infiltrated by the secret services, and the threat of an outright ban was ever-present.

Directors Wojciech Słota and Leszek Gnoiński unfold their story in assured style. Hooking up with Chris Salewicz, an acclaimed British music journalist whose father fought with the RAF, they begin their quest in London. Later, Salewicz meets legends of the punk explosion, and amidst vivid recollections from the veterans, a history of Polish protest emerges.

Although there are charming flashbacks to figures like Czesław Niemen and his landmark protest song “Dziwny jest ten Swiat”, (“Strange is this World”, 1967), the real meat of the movie is the punk era. The directors skilfully juggle a mass of disparate material: photographs, grainy live footage, news reels and contemporary interviews. Stars such as Tomasz Lipiński of Brygada Kryzys (The Crisis Brigade) recount run-ins with the communist authorities, and his band’s eventual ban for not playing ball at an official event. Meanwhile, the affable Chris Salewicz maintains an inquisitive yet respectful presence, never attempting to steal the show from his subjects. The outcome is a fascinating evocation of how rock expressed the disillusionment of a generation with the Soviet system. Beats of a higher order.

Beats of Freedom is showing at selected cinemas. Although the narration is in English, some scenes are purely in Polish for the nationwide release.