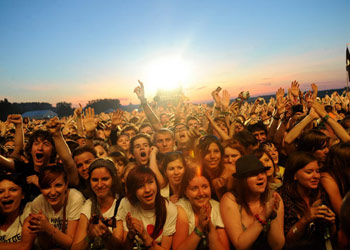 It’s been a good decade for live music in Poland. Ten years ago, the word “festival” may have conjured up nothing more than the odd church gathering or haphazardly organised punk or metal event. Now, we have a veritable plethora of musical events to suit all tastes, and here is a run-down of the more important ones you can catch here this year.

Following last year’s resounding success in attracting Royksopp, Franz Ferdinand, CSS and others, the sophomore year of Selector feels a bit more low-key, with Faithless being the biggest international act announced so far. Still, for the dance and electronic fraternity, the event, located conveniently on Błonia, promises to be a fun weekend to kick off the festival season, with Faithless, Thievery Corporation, Metronomy, Boys Noize and Uffie definitely on the list. Feel the beats 4th – 5th June 2010.

Offering festival-goers some top international musicians along with a host of Polish music and theatre acts, the 9th Heineken Open’er Festival takes place in Babie Doły Airfield, Gdynia, for four days between Thursday 1st and Sunday 4th July 2010. In its eighth year, The Open’er has become THE festival to go to in Poland, so if you’re only going to splash out on one, make it this. Pearl Jam and Kasabian will headline, with Skunk Anansie, Nas, Damian Marley, Tricky, Massive Attack, Pavement, Hot Chip, Gorillaz, Sound System, The Hives, Tinariwen, Mando Diao, Ben Harper and Relentless7, Empire Of The Sun, Klaxons and Matisyahu also confirmed.

Billed as the most important alternative festival in Poland, since 2006 the audience for the OFF festival has been rocking the town of Mysłowice, the birthplace of its creative director – Artur Rojek (of Myslovitz fame). Sadly, neither Artur nor fans will be able to celebrate the festival’s 5th anniversary in the place of its origin as this year organisers have had to find a new location: Dolina Trzech Stawów (Three Lake Valley) in Katowice. That hasn’t deterred The Flaming Lips, Tindersticks and The Fall – playing Poland for the first time – from putting their names down. If you’re not doing anything else between the 5th and 8th of August, head slansk-side and see what’s going off.

Now in its 5th year, this Płock-based festival is firmly focused on music that gets less media attention – house, drum and bass and techno – with a host of international DJs spinning their stuff. Last year’s record attendance of 12,000 testified to the festival’s growing appeal, so get on your dancing rags and take your disco biscuits to “a beach on the Vistula” in Płock between the 6th and 8th of August. Plastikman, Laurent Garnier, Ellen Allien, Hybrid, The Modern Deep Left Quartet, Krazy Baldhead, Dusty Kid, Hadouken, Noisia Qemists, Qemists Soundsystem, Karotte should keep you moving till the sun comes up.

A rather more poppy event, the Coke Live Festival, situated on the huge disused airfield lying to the east of Krakow in the environs of Nowa Huta, has gained popularity in recent years with some notable artists such as The Prodigy, Kaiser Chiefs, 50 Cent and The Killers. This year’s major coup has been persuading Muse to come, though other artists are yet to be confirmed. Ian Brown, ex-Stone Roses, has been rumoured to be jetting over . The Coke festival traditionally rounds off the calendar, falling on the second-last weekend of August.