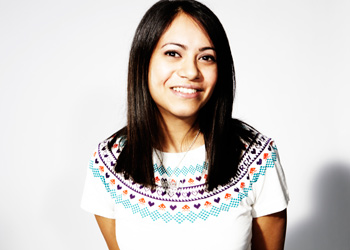 Finding underground dance music in Krakow always seemed to require a bit more digging than usual. But over the last year, one club night in particular has brought the entire country’s attention to our doorstep. Since its inception, POW! has brought some of the most innovative names in dance music to Krakow, and these appearances are one of the very few these DJs make east of Berlin. This month, the POW! crew have invited Ikonika, west London producer and DJ extraordinaire, to spin at what will surely be POW!’s biggest night yet. Last year’s Unsound festival provided the stage for Ikonika’s Krakow debut, where she closed the second Bass Mutations club night at Manggha. With her album Contact, Love, Want, Have hitting shops this month, Ikonika spoke with the Krakow Post’s Dana Dramowicz about her creative journey.

Ikonika is a leading player in the modern derivative of dubstep, the bass-focused musical movement that shot out of the UK and is now tearing up dancefloors across the globe. But with the dubstep term becoming so ubiquitous and consequently vague in the last decade, merely stamping the dubstep badge onto Ikonika’s sound would mean you’re simply not listening.

Shuffling, off-beat rhythms, skittering hi-hats, dissonant 8-bit melodies, and relentlessly deep basslines are her trademark, pointing towards the fact that not only is Ikonika acutely aware of the UK’s most cutting edge sound but more than anything else, she is now defining it. While the blogosphere invents and dismisses labels and tags at an equally dizzying pace, Ikonika appears to embrace the fresh new sounds of UK funky and wonky while looking inwards for inspiration.

“I grew up listening to R&B, hip-hop and UK garage. I got into hardcore and metal in my late teens,” she says. It was only three years after she discovered dubstep in 2005 that her first 12” single, “Please”, was released on the revered Hyperdub label, home to such artists as Burial, Kode9, Zomby, and The Bug.

Following a series of singles and remixes, Ikonika will finally release what she describes as her most focused and grounded work to date on 6 April – her debut album Contact, Love, Want, Have. “The title reflects what I want from music in general,” she explains, “It’s about finding comfort in being dizzy and disorientated.” The album’s first single, “Idiot”, may be driven by a wonky, disorientated melody, but it remains grounded in an unwavering, upbeat rhythm. It’s a trend that continues throughout an album where the highlights are not massive drops, but the revelatory moments when layers of sound hesitantly bubble to the surface.

“I’m all about getting into the zone,” says Ikonika, “I just like mucking around for a bit and not knowing where I’m gonna go… Getting the groove right in a track is the most important thing. Once it makes you move and want to dance, you can experiment with the other parts of the tune, like melody and harmony and so on.”

And as we saw at Unsound, getting a crowd to dance is exactly Ikonika’s speciality, not only as a producer but as a DJ as well. “I love the feeling of making people dance and go wild, but I also love writing. I guess writing a good song then playing it out and people going mad is the compromise!”

But as the club scene continues to squabble over terminology, Ikonika keeps her focus squarely on the music. “I’ve never aspired to be anyone other then myself,” she affirms, “There’s lots of music I love and that inspires me, but I’ve always felt I have a unique style, hence my name!”

Once a city of house and, at a stretch, drum n bass, the last year has seen a steady rise in bass nights in Krakow, rumbling out of Old Town clubs like Krzysztofory past Caryca down to Mish Mash in Kazimierz. However, it’s the POW! monthly series that has consistently upped the standard in the city. While the rest of the world was still learning the names of Joker, Oneman, or Shortstuff, here in Krakow we had already checked them off our list.

When they’re not booking gigs for bleeding edge DJs, POW!’s organizers Thomas Wirski and Tomasz Urbanowicz produce music as SUPRA1, touring the world and winning respect as part of the New York-based Trouble & Bass label. But Wirski says that with POW!, pushing the sound of Krakow forward is “definitely number one on the list. We started the night because we felt like we had nowhere to go out ourselves, simple as that.”

Before they knew it, the POW! crew had amassed a backlog of some pretty impressive names. Certainly the biggest name so far is this month’s guest, Ikonika.

“Why Ikonika?” asks Wirski, “[A] girl in the male-driven music industry, bridging genres, producing and playing an absolutely love-it-or-hate-it type of weirded out stuff. Off-key synths, post-garage heavy subs. [It’s] confusing. We want to confuse people. The music itself never was or will be easy – it’s meant to be very, very different to what you hear anywhere else… It’s deep, dark and underground, sub-bass-driven and experimental. You can love or you can hate it – if it only moves you or pushes you into one or the other – that’s what matters to us.”

Ikonika performs with The Phantom an Supra1 at POW! in Prozak (pl. Dominikański 6) on 23 April.

Contact, Love, Want, Have is released on 6 April on the Hyperdub imprint.