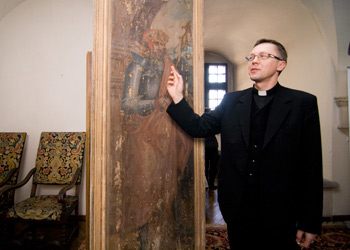 Gold was struck this winter when a missing royal portrait was revealed in the Cathedral of the Nativity of the Blessed Virgin, Sandomierz. The two-metre tall painting was discovered by Urszula Stępień, custodian of the town’s diocesan museum. At first, Ms. Stępień was reluctant to believe that she had found a Renaissance relic. However, following consultation with a pre-war inventory, she became convinced that this was the portrait of King Władysław Jagiełło listed by one Father Andrzej Wyszykowski in 1933.

The painting has now been brought to the Royal Castle at Wawel for far-reaching conservation. Preliminary analysis has dated the work, which was painted in tempera on limewood, to the second quarter of the 16th century. If it is indeed a representation of Jagiełło (ruled 1386-1434), it will be the oldest extant portrait of the monarch.

The fortuitous find has raised the tantalising prospect that the painting will be ready for Wawel’s oncoming anniversary tribute. On 15 July, a major exhibition will be launched under the patronage of President Lech Kaczyński, commemorating Jagiełło’s fabled victory over the Teutonic Knights at the Battle of Grunwald in 1410.

For more information about Grunwald 1410-1610, see the castle’s official site at www.wawel.krakow.pl