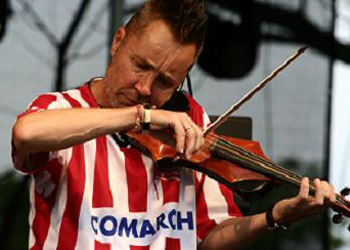 The Krakow-based musician will be organising three days of events for the May send-off. Sparking the most gossip thus far is an idiosyncratic screening of Poland’s soccer victory over England in 1973, a match that knocked the Tommies out of the World Cup. Kennedy will be setting the showdown to a semi-improvised jazz score, performed live at the Royal Festival Hall by the virtuoso and his team of Polish talents.

Also in store for the late May medley are performances by a string of Polish stars, including Klezmer quartet Kroke, folk-pop fusionists Zakopower, not forgetting the newly formed “Nigel Kennedy’s Chopin Supergroup”.