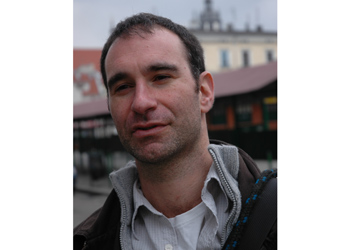 Jonathan Ornstein is the director of the Jewish Community Centre, which was opened to much fanfare by Prince Charles nearly two years ago. Hailing from New York City, Jonathan has made Krakow his home, and before his role as JCC director he lectured in Modern Hebrew at the Jagiellonian University’s Department of Jewish Studies for six years and founded the “Gesher” association for Polish–Israeli dialogue.

Jonathan Ornstein: I would live right where I live now, in Kazimierz, or perhaps in Podgórze near the river. My absolute dream though would be to live in the coolest building in Krakow: Hotel Forum.

JO: An immediate ban on new shopping centres. If Cracovians do all their shopping in the malls, the Old Town will cease to be the true heart of Krakow and will turn into a place locals avoid and only tourists visit, like Prague. God knows none of us want to live in Prague.

JO: The Rynek, Kazimierz, and of course the beautiful JCC. Outside of Krakow, I love going to Wieliczka and licking the walls.

JO: How about a statue of King Kazimierz the Great and his Jewish lover Esterka? It would be a nice symbol of close Polish-Jewish relations.

JO: Working in Kazimierz, I spend a lot of time in the pubs on Plac Nowy. I like Kolory during the day, Mechanoff in the evening and Singer at that time when you really should be asleep at home. Nowy Prowincja is great for hot chocolate in the winter. My favourite restaurant is, without question, Al Dente, I eat there once or twice a week. The best pizza in Poland.

JO: A tie. The lack of decent ethnic restaurants and the stag parties.

JO: To be honest, I have a hard time escaping from Kazimierz. A weekend escape for me is the Rynek!

JO: On the grassy slope leading down to the Wisła across from Hotel Forum.

2 thoughts on “My Life: Jonathan Ornstein”