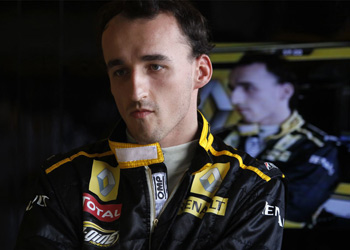 Spring has brought a new Formula 1 racing season, and ahead of it came a huge wave of anticipation as many analysts predicted the most thrilling season in the history of the series. Excitement was high, as rule changes and technical tweaks were intended to improve competitiveness, and seven-time world champion Michael Schumacher returned after a three-year hiatus. Krakow’s very own Robert Kubica appeared to have found his place behind the wheel after leaving BMW to join a newly restructured Renault team.

Then came race time. Over a hundred thousand viewers and millions around the world watched cars roar around the track at the Bahrain Grand Prix. Two hours and fifty laps later, the conservative driving and glacial pace of change in the standings had left many fans yawning and puzzled. Where was the overtaking? When the race was over, the word from the drivers was clear: F1 is likely to be a no-passing zone this year.

The devil is in the technical details.

The FIA made numerous rule changes this year, including a ban on refuelling during the race, combined with a reduction in the width of the front tyres. These factors impacted car performance — and the strategy drivers need to stay in the race — in a way that the organisers did not anticipate.

F1 cars’ enormous power and speed would be far too great for the drivers to keep the wheels on the track without powerful traction, and there are two ways designers can work to give that grip; the first and more obvious is to use huge grippy tyres and sophisticated suspensions, and the other is aerodynamic downforce. In effect, an F1 car functions like an airplane, but upside down. All the wings and curves of the body are designed to suck the car downward as it increases in speed, multiplying the car’s traction and keeping the vehicle from sliding, as the friction of skidding spells death for those soft, gooey tires.

The problem: this year, the mandated thinner front wheels have made the mechanical grip — the kind that the tyres produce — less powerful in the front ends of the cars, increasing the dependence on aerodynamics. Unfortunately, those aerodynamics require relatively calm air, and the air in the wake of a 900 horsepower F1 car is anything but calm. The result is that when one car follows another closely it gets caught in the turbulence behind the one in front, losing grip and risking tyre damage. And without getting close behind, it’s impossible to pass.

Is there a way through the pack?

So will F1 cars be able to pass each other this season, or are the millions of fans to be treated to processional races like the one in Bahrain, which one commentator likened to a “conga line”? Robert Kubica may have the answer to that.

After a minor collision in the first turn at Bahrain, Kubica and Adrian Sutil were engulfed in a smokescreen from the exhaust of Mark Webber’s Red Bull car, causing them to spin, and burn up their tyres. Kubica sunk to 16th, falling off the radar of the only authorised television transmission of the race. As the front of the pack settled into a static parade on worldwide TV, Kubica was producing a credible offensive from the rear, showing excellent pace and moving up five places to eleventh before his tyres and brakes could take no more aggressive driving.

None of this year’s issues are altogether new, and this is not the first, nor will it be the last time that fans and teams have baulked at rule changes, which are an annual occurrence. Some of the drivers have backed away from pessimistic public comments they made themselves in the first week of the season, possibly realizing that announcing that their own sport is a bore was unwise. Kubica himself has dismissed the furore, saying that passing has always been tough to do.

Formula 1 racing, itself buffeted by the economic turbulence in the auto industry and overall economy in recent years, badly needs to thrill audiences without alienating purists drawn to the pursuit of perfection that characterizes the series, where success requires a perfect storm combination of mechanical perfection, driving skill and a little luck. As the season unfolds, fans everywhere will be hoping that someone has the answers for the passing dilemma, and if his admirers in Krakow have their way, that someone will be local hero Robert Kubica.

Confused about Formula 1? Be sure to read our Formula One 101 guide.