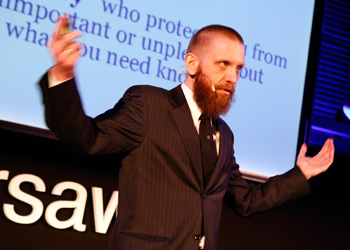 Early March saw Poland’s first TEDx event take place in Warsaw, and two Cracovians delivered some of the most popular talks of the day. Jonathan Ornstein of the Jewish Community Centre spoke about the resurgent Jewish populace in Krakow and Dr. Marek Minakowski, chief scientist at DreamLab Onet, gave a historical perspective on the future of the Internet (I have to declare my interest here as I nominated Jonathan as a speaker).

TED, a small, U.S.-based, non-profit foundation “devoted to ideas worth spreading”, has been organising and curating the popular TED conferences for the last 25 years, and more recently their main website, TED.com. Known for inviting interesting speakers who are working in the overlap between Technology, Entertainment and Design (from where TED gets its name) over 650 TED talks have now been posted online and many more are available on YouTube.com. The topics are wide-ranging – from how food shapes our cities (British architect Carolyn Steel, who presented a longer version of her talk in Krakow in December 2008), to Joshua Klein about training crows to use a vending machine and possibly pick up rubbish, to Al Gore speaking about how to avert the climate crisis. Costing $6000 to attend, the main TED conferences are sold out well in advance and are seen as a must-attend networking event for many in these industries.

The idea behind TED is pretty simple: a one-day event of short, carefully prepared talks, demonstrations and performances on a wide range of subjects which TED intends to “foster learning, inspiration and wonder and provoke conversations that matter”. The presentations are by a single speaker and last 18 minutes (too short for a long academic presentation and too long for off-the-cuff chatter). There are no panel discussions, no breakout sessions and usually no podium. It’s a fast-moving event and the goal is to encourage animated discussion in the substantial breaks between sessions.

The foundation has also issued licenses for independently organised TED-like events, TEDx. Anyone can apply for a license and, provided they follow certain rules, the format of the events can take many forms. TEDx talks have been held in places as diverse as people’s living rooms in the U.S. to Kibera in Nairobi – Africa’s largest slum.

TEDx Warsaw was a slicker affair, as you might expect from Poland’s capital city. A corporate sponsorship deal allowed the volunteer organisers to create a professional set at the University of Warsaw’s Old Library and the whole event was streamed live online and to iPhones and viewed by over 700,000 people in places as far afield as Bangladesh, the Maldives, the U.S. and New Zealand (second only to the Polish prime minister). The organisers decided that the presentations were to be in English, arguing that the audience for TED talks is a global one.

Mr. Ornstein’s and Dr. Minakowski’s talks were amongst the best received and most talked about both during and after the event. Mr. Ornstein spoke of the challenges of creating a Jewish community in a place where a growing number of Jewish Poles are coming forward, mainly those who are either elderly or young. Challenging the widely held assumption that over 1,000 years of Judaism and Jewish life in Poland ended with the Holocaust, his warm, funny and frank presentation received a standing ovation from the audience.

Dr. Minakowski, a historian, philosopher and genealogist, spoke of the growing gap between our brain’s capacity to process information and the exponentially growing amount of information available to us online. He forecast the emergence of an Internet filtered by our own “perfect secretary with a crystal ball”. The “secretary” will sort out anything unpleasant or unimportant to us and let through the information we need to know, whereas the “crystal ball” will answer all of our questions (even the unspoken ones).

Even though each of the 24 speakers at TEDx Warsaw is well known in their field in Poland (and in some cases, internationally), the breadth of the subjects covered meant that the event gave a fascinating insight into some of the ideas coming out of the country.

All of the TEDx Warsaw talks are now available online and the next events in Poland are already being planned; TEDx Poznań will take place in late May and TEDx Krakow is planned for autumn 2010.