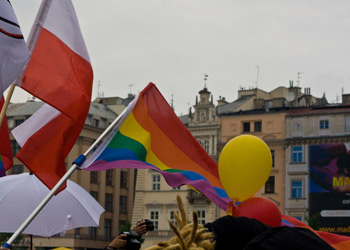 With Krakow’s annual jamboree of gay and lesbian events fast approaching in the form of the Culture for Tolerance Festival later this month, followed by a “Queer May”, the time seems right to examine what it’s like to be gay or lesbian in Poland.

Homosexuals have long been an easy target for some Polish politicians keen to portray them as cloven-hoofed bogey monsters, in order to extol their party’s moral virtues and create a media sensation. So last year when Krystian Legierski, a gay Green Party politician, caught wind of a barrage of homophobic comments made by right-winger Maria Miesikowska-Szreder, he decided it was time to take a stand and challenge her forthright views in court.

Ms. Miesikowska-Szreder had announced that homosexuality was a “genetically transmitted disease” and warned parents to scrutinize their children’s every twitch for any hint of “gay behaviour”, to prevent “the disease developing”. However, the court ruled against Legierski, stating that genetic tests would have to be conducted before it could decide on whether being gay was a “disease”, effectively killing the case.

Legierski’s experience is unlikely to shock many of Poland’s homosexual men and women; surveys repeatedly unearth negative attitudes towards the LGBT community – a recent poll found 89 percent of Poles disapproved of gay lifestyles. The take of many Poles towards gays seems to be that they should keep a low profile and just be grateful if they are not being actively persecuted. While further west, gay parades are an excuse for anyone, whatever their proclivities, to party, here the annual Tolerance March is charged with tension and suspicion.

The march is complemented by the Kultura dla Tolerancji (Culture for Tolerance Festival). Samuel Nowak, one of its organisers, feels that Krakow is a gay-friendly town that’s changed a lot in the noughties with the influx of tourists, many of whom are gay and less likely to be inhibited while on a city break. Poland, which had been caught behind the Iron Curtain for half a century, was not able to undergo the “sexual revolution” that many Western countries experienced during the sixties. As an example of progressive attitudes, Nowak highlights 2008’s “gay campaign” in Krakow, which aimed to promote the city as gay-friendly. However, he suggested that the city’s cash could have been better spent on initiatives such as anti-homophobia campaigns. Eventually, the city council ended up denying the existence of the campaign, underlying the fact that for many organisations gays and lesbians are still too taboo.

Not so for the Church. “It’s obsessed with gay people,” muses Nowak. “Although there’s been a change in its language lately and it’s less condemning, I’m still sceptical. However, I don’t think it will ever change its attitude fundamentally in my lifetime.” Probably it’s over-simplistic to refer to “the Church”, as there are sections and splinter groups whose views vary from shallow acceptance to outright bigotry. Father Piotr Skarga’s Association of Christian Culture vehemently opposes gay rallies. A few years ago the group slapped anti-gay slogans such as “Stop the moral corruption” on billboards in Krakow. More recently, they waded into the phony gay tourist campaign proclaiming: “Drunken Britons may get their genitals out in public, but we don’t want gays performing public obscenities either.” Although some voices in the Church are more conciliatory, such as Father Tadeusz Bartos, who stated, “The Church is against any form of discrimination of gay people,” religion continues to steer people’s morality and to some extent political issues too.

In 2006 the Campaign Against Homophobia collated 1,000 responses uncovering routine discrimination and abuse experienced by gay people. Comments included: “My father [said] that I am ‘socially useless, a mentally immature person’”; one man was told by his dermatologist “to go see a vet.” Nearly 20 percent of respondents had been physically assaulted and of those more than 40 percent had been abused at least three times – suggesting that once acquaintances discover your sexual orientation, the jibes and the jabs are likely to keep coming.

The report unearthed online activities of the right-wing Red Watch, which posts details of prominent gay and lesbian figures, such as Robert Bierdroń, as a kind of hit list of hate. In Warsaw two years ago, an activist was attacked as part of the Polish group’s policy of “tracking the reds”. Julie Land has lived in Krakow for the last three years and at one point her ex-girlfriend was on the hate list, a period she refers to as “terrifying”. Land recalled her first Tolerance March: “They always scare me but I’ve got used to them. A few years ago the route passed Wawel Castle and rocks were hurled on top of us. What made me feel more anxious this year though was that we felt outnumbered by the protesters.”

When it comes to education, being openly gay is a no-win situation. Hardly surprising, given that the Law and Justice Party was toying with adopting a policy that would ban schools so much as mentioning the word “gay”. Opponents shudder knowing that such laws could easily be tweaked to ban marches as well – which often only begrudgingly get the green light to go ahead as it is. Bierdroń claims that right-wing politicians have cynically exploited Poles’ insecurities towards gays by dabbling in rhetoric that panders to their fears, selling themselves as the upholders of traditional values, while the media’s infatuation with gay issues guarantees them automatic press coverage.

Once Poland joined the EU, however, it was committed to outlawing discrimination towards gays and lesbians in the workplace. In terms of equality that was the minimum it was obliged to do – and that’s all it’s done to date. “The first Krakow march took place a few weeks after Poland joined the EU,” says Land, “and many people viewed it as a sign that Poland was changing for the worse. People felt they needed to defend their traditions and there was a mood that now the EU was going to impose their worldview on the city.” While many might have viewed entry into the EU as a green light for Brussels bureaucrats to tell Poles how to live their lives, a cavalcade of 20- and 30-somethings left to seek their fortunes abroad. In British cities, with their multitude of faiths, skin tones and blurred sexual lines, cosmopolitan life would have been a revelation for some Poles. Kasia Kohl, who moved to Dublin in 2005, said: “Yes, I go to church but that doesn’t mean I’m prejudiced. Before moving to Ireland I’d never known any gay or lesbian people – in fact I didn’t really think they existed. Now I know so many people, I realise the statements made about gays by some Polish politicians are ridiculous.”

Perhaps things are changing. Although Krystian lost his case, last summer in the small town of Wolin a gay man, Ryszard Giersz, was awarded 1,500 złoty by a judge after his neighbour was convicted of harassing him. Bierdroń, who backed Giersz, said that the victory “might become a symbol for Polish society leading to a change […] in people’s attitudes towards us.” Even the Church is evolving; recently, Warsaw got its first openly gay rabbi, Aaron Katz, who has won warm acceptance among his congregation. These small shifts may give gays and lesbians the courage to be comfortable with themselves. The crossroads that Krakow finds itself at is, perhaps, best illuminated by Fran, an 18-year-old openly gay student. As he slurps on a litre of ginger beer, he chimes: “All my friends know I’m gay, and they always go with me to gay clubs even though they’re not – even the guys. My teachers know as well and they’re fine,” he hesitates, “except for my religious education teacher, she just tuts and shakes her head at me.”