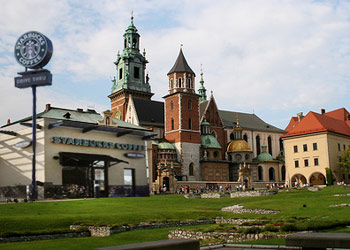 When the first Starbucks in Poland opened its doors on Warsaw’s Nowy Świat Street, Cracovians thought that their turn would come at any moment. However, it took almost a year for the former royal capital to finally get its own incarnation of the successful American coffee chain. And appropriately enough, the first location, which opened today, 1 April 2010, is within the walls of the city’s historic Wawel Castle.

The deal was struck between the Krakow City Council and Starbucks Coffee Company in November 2009, but final negotiations over the location of the first Starbucks in Krakow lagged on until mid-February. Finally, the Council was satisfied with an agreement that guaranteed that the American coffee chain would provide the funds for a new elevator to the Sigismund Bell, which will be called the “Double Blended Liftuccino”.

The Krakow Post talked to Krakow City Council member Basia Ostrowska, who was clearly excited about the deal: “We are so excited about this deal! At the beginning, there were many naysayers telling us that we shouldn’t allow historical monuments to be sold to foreign corporations for the sake of an immediate profit. But this is a new post-1989 Poland, where we have to embrace such opportunities. It’s capitalism, baby!”

Starbucks spokesperson Lee Smith agreed: “In Krakow, everything is for sale – historical monuments, natural parks, public transportation. It’s wonderful that the city is so open to foreign businesses, and doesn’t let petty hindrances, such as the will of its citizens, get in the way.”

The company is so confident that the coffee chain will succeed in Krakow that several future locations are already being negotiated. A source within the Polish division of the company revealed to the Post that four new locations are “nearly 100 percent guaranteed to open”, including spots on the Market Square, in the former Forum Hotel, within the newly-constructed Cracovia Stadium, and in the basket of the Krakow balloon.