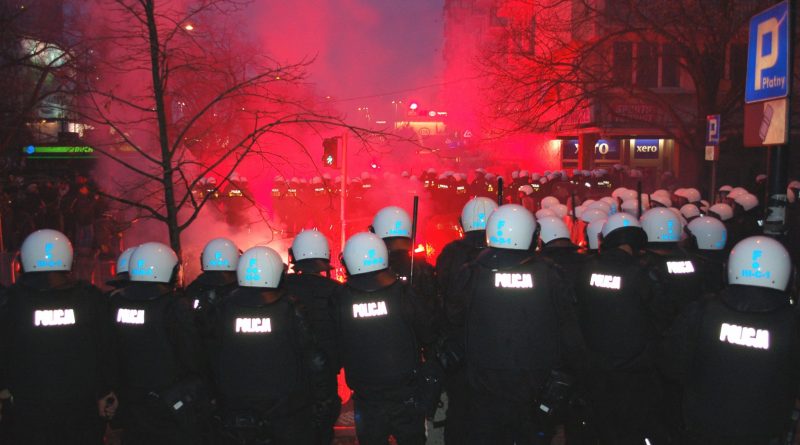 As Europe and the world celebrate 100 years since the end of World War I – arguably one of history’s most senseless and bloody conflicts, which saw around 37 million military members and civilians killed for, essentially, colonialist posturing by a handful of monarchs – Poland commemorates more specifically the anniversary of its return to independence after 123 years of partition between Russia, Prussia, and Austria.

This particular day was chosen because it was on 11 November 1918 that Józef Piłsudski returned to Warsaw from German imprisonment to be granted control of Polish military forces, effectively taking leadership of a newly independent country: the Second Polish Republic, which lasted until the takeover of Poland during the next World War by Nazi Germany and the USSR.

Piłsudski – now widely considered to be one of Poland’s greatest heroes and leaders – was a socialist who supported a multi-ethnic Polish state. Although a military man who was preoccupied with matters of security (especially against the Soviet Union) and believed a strong sense of national tradition was key to the country’s unity, he stood in contrast to his chief rival Roman Dmowski, a vocal anti-Semite who believed that the only true patriots were those who were Catholic and spoke Polish.

It is ironic, because 100 years on it is Dmowski’s vision of Poland which seems to dominate the national Independence Day. For the past decade, 11 November in Poland has been marked most notably by aggressive marches by far-right groups, especially in Warsaw. Clashes between police and marchers in 2012 and 2013 led to mass arrests and some injuries in the capital, as well as the burning of a local rainbow sculpture which had come to symbolize the LGBTQ movement. There has been less violence in recent years, along with separate, formal parades in the capital supported by the government – which has variously led to charges from the left that the government is tacitly condoning the nationalist marches, and from the right that the media is overly focused on fringe groups over more peaceful and positive celebrations.

Nevertheless, ultranationalists still overwhelm the narrative of the holiday. Last year an estimated 60,000 marchers led chants such as “Death to enemies of the homeland” and “Catholic Poland, not secular,” bearing banners with slogans like “White Europe” and “Refugees get out”. The right-wing marchers’ slogan of 2017 was “We want God,” taken from a speech a few months earlier by US President Donald Trump in Warsaw. Some participants openly identified as fascists.

This year, out of fear that the centennial could get out of hand, Warsaw’s outgoing mayor Hanna Gronkiewicz-Waltz attempted to ban the march, but her decision was overturned by the courts. (Anxiety about this year’s security has only been exacerbated by a police strike, and the US State Department warned citizens in Warsaw to “keep a low profile”.) Polish prime minister Mateusz Morawiecki and president Andrzej Duda from the ruling right-nationalist Law and Justice (PiS) party then said they would join the official parade led by veterans.

Although they have had harsh words for the right-wing extremism on display in the past, Morawiecki and Duda have been criticized by scholars such as Jacek Kucharczyk, head of the Polish think tank Institute of Public Affairs, for “mainstreaming the far-right.” PiS has also made controversial changes to the judiciary and moves against press independence which many observers in Poland and internationally characterize as a shift toward antidemocratic right-wing consolidation of power.

In Krakow, Independence Day celebrations have been less heated. Today Krakow mayor Jacek Majchrowski, who was recently reelected for a historic fifth term, began the ceremonies by laying flowers to commemorate Polish soldiers before a mass at Wawel Royal Cathedral, and later national songs were sang by choirs in the Main Square and there was a memorial ceremony before the Tomb of the Unknown Soldier. Also there will be an annual Independence Day run, now in its fifth year. At 17:00 on the Main Square there will be more patriotic songs, and at 19:00 there will be a special concert at the ICE Congress Center at 19:00 led by pianist Paweł Kaczmarczyk featuring songs inspired by Poland’s founding and history, as well as a quartet of patriotic singers at the Military Parish Church. St. Agnieszka.

For their part, most average Poles seem to view independence day as most people in other countries do, with a peaceful sense of national cheer and celebration of history and identity rather than xenophobia and aggression. Most I spoke to expressed regret and annoyance at the prevailing ultranationalist narrative, comparing Poland’s Independence Day unfavorably to, say, the fireworks and high school marching bands on the Fourth of July in the US.

“I don’t know what I would do if I were the president of Poland,” one Krakow man in his 40s quietly reflected when I asked about it, criticizing the holiday’s relative lack of brightness, “but I know there would be events all throughout this year, leading up to a big celebration of today: the 100th anniversary.”

Whether or not the vision of Warsaw or Krakow – Dmowski or Piłsudski – will prevail over the spirit of Poland’s independence remains to be seen, even a century later. The answer, just as for the spirit of the Polish people and their politics in general, probably lies somewhere in between.

19 thoughts on “Poles celebrate independence amid fears of ultranationalism”